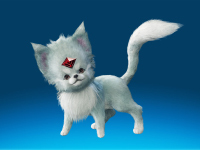 Unless you have not been on the internet recently, we have seen a few images of the summons that are coming to Final Fantasy VII Remake. Some of them are the core ones that we all know and love and others are summons that Square Enix has crafted for us to entice us to pre-order the game. All of which will most likely be DLC at a later date, but there are three that can only be picked up if you pre-order Final Fantasy VII Remake and buy specific versions of the game. All of which on the PS4 and, thankfully, not limited to a specific store. I really hate when these things are limited to retailers and not just open to all who wish to throw down the money.

In terms of what we are going into here for Final Fantasy VII, we have a look at the Chocobo Chick, Carbuncle, and Cactuar. The first one available to all who pre-order the game, the next if you get the Deluxe edition, and the final one if you get the 1st Class edition. The last one being the only way to get all three. If you have been holding off because you want to see how they will play, you can now see them in motion in Final Fantasy VII instead of just images. The way it should always be, but we are not able to dictate that all of the time.

As you will be able to see below, the Chocobo Chick pops in and casts a few spells while you are doing the heavy lifting here. Carbuncle will come in and do what we normally have had in the Final Fantasy franchise with Reflect being cast on the party to further protect them. The final one being the Cactuar that will run in and do the normal 1,000 Needles attack to your foes. Unlike in past Final Fantasy titles, though, it finishes off with a nice explosion of needles that looks to harm friend and foe equally. So it could be a tide-turner but something to watch out for as well.

Take a look at Chocobo Chick 🐤, Carbuncle 🔴 & Cactuar 🌵 in battle!

What do you think of these DLC summons for Final Fantasy VII Remake that we have coming now? Do you think that they will all be in the core game and available later on or will they be the place of pre-orders for a while? Does it make sense that the Cactuar would attack all or does that kind of ruin the point of a summon? Let us all know down in the comments and then feel free to discuss it all. When we have more to share for Final Fantasy VII Remake, we will share it all here. Be sure to keep checking in for that and much more.