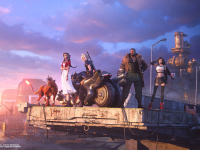 Even though Final Fantasy VII Remake should have been launching in a few weeks and we still need to wait until April 10th still, we have a new look at another big moment from the game today. That is, it looks like Square Enix has given us a look at the opening cinematic for the game to look at and relive those moments from when we first dropped the first disc into our PlayStation so long ago now. All with the familiar looks and feels for the game with the new visuals, but also a few little extras we did not get to see in Final Fantasy VII the first time around. At least there are scenes I do not remember being part of the original version of it. Now it is all done in the great visuals that the PS4 can throw at us now.

There really is not much else to say about it and you most likely jumped on down to watch its glory. I will say that it brought all of that Final Fantasy nostalgia back in when watching again. It did not have the same impact as the original version as it was not a huge leap from sprite graphics to the 3D that gave the shock and awe from before. It is going to take a bit more to do that again, but that is not to discredit anything for Final Fantasy VII Remake in its current form. It will have to be a holodeck style game before we get that again I fear…

What do you think about the new video we have here for Final Fantasy VII Remake? Did you get the same nostalgia here or did it just feel like something in the current generation of things here? Could this change when the game finally launches or will it just feel like that until we get something truly new in the world of gaming as the original did? Let us all know your thoughts down in the comments and then feel free to discuss it all. For more on Final Fantasy VII Remake, be sure to keep checking in here. We will keep the information flowing as best as we can and hopefully you will not be let down.