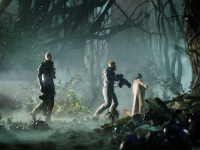 It is time to check in on Outriders again as it has been some time since last we did and did not have all that much to check in on. Now we are back and have something from People Can Fly and Square Enix for the game and…again, it is not too much to go on for the game. On the plus side, we do have word now that Outriders will be heading to the PS5 and Xbox Series X on top of the PS4, Xbox One, and PC. On another downside, this does mean that the game will not be coming until the holiday season of 2020 now instead of the Summer of 2020 that was given to the game before. We are just all over the place on this one now, are we not?

Now that all of that is out of the way, we do have something new to see for Outriders along with all of this news. Even if it does look like it is more of the CGI version of things and not any actual gameplay. It is still fun to see, as it gives us a little bit more of the story and lore we will get to experience. That and it is a holdover until this Thursday (2/13/2020) when we will have a reveal stream to tune in for. I am going to venture a guess that this will be where we will see live gameplay for Outriders but it could also be just more of the hype train. Even if it would be nice to see the game running on the newer consoles that have yet to be fully revealed. I guess we will see here soon.

Outriders is an RPG shooter set in an original, dark and desperate sci-fi universe. As mankind bleeds out in the trenches of Enoch, you’ll create your own Outrider and embark on a journey across a hostile planet. With rich storytelling spanning a diverse world, you’ll leave behind the slums and shantytowns of the First City and traverse forests, mountains, and deserts in pursuit of a mysterious signal. Combining intense gunplay with violent powers, along with an arsenal of increasingly twisted weaponry and gear-sets, Outriders offers countless hours of gameplay from one of the finest shooter studios in the industry.

Where are you at on all of this for Outriders here and is it odd to have all of this shifting as we have seen thus far? Would it have been different if we had some solid gameplay to take in with these announcements or does it all make sense at this point? Do you think we will see the game running on the PS5 or Xbox Series X during the stream or will it be the current-gen setup for now? Let us know what you are thinking down in the comments and then feel free to discuss. As we get more to share for Outriders, you know it will be added to the site here. Just be sure to keep checking in for all of that and much more. We know there will be some kind of update soon.