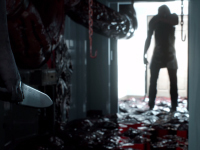 The release date for Infliction: Extended Cut is set down for the PS4 and Xbox One with Infliction hitting the Switch later

Well, it looks like we finally have a release date for Infliction: Extended Cut on the PS4 and Xbox One and that would be February 25th now. Sure, Caustic Reality and Blowfish Studios have had the game out there on the PC for a while now but this is a nice new packaging for the consoles here that will soon be ready for a whole new branch of gamer out there. Hopefully you have not spoiled Infliction with streamed videos as of yet. More so for those looking to get the game on the Switch, as you may have noticed that the game is not coming to that platform at the same time now.

Yes, sadly, it looks like Switch owners are going to have to wait a bit more to get Infliction: Extended Cut on their systems to indulge in all of the nightmares this game might induce. It also means that they will have to dodge all kinds of spoilers to make sure they keep the game fresh for when it does finally join the ranks. Something that should not be too far off, but not at the same time now. It sucks, but thus is life and they do have other options on how to get in on the Infliction there. Just not as fun if you ask me.

Infliction is an interactive nightmare, a journey into the dark secrets of a fractured home. Wander through the heartbreaking remnants of a once-happy family, piecing together clues and trying to atone for past sins. All the while, a malevolent force stalks your footsteps, seeking violent retribution. Can you survive long enough to piece together the past, or will you become the victim?

Coming February 25th to Playstation 4 and Xbox One!

Are you excited to finally get this version of Infliction on the consoles or have you been enjoying the game for a while now? Are you curious as to why it will not be hitting the Switch at the same time now or does that matter to you at all? Are you just glad to have a few other options out there to be able to enjoy the game here shortly? Let us have all of that and more down in the comments. When we have the future updates for Infliction: Extended Cut, we will share them all here. All you have to do is keep tuning into the site for all of that and much more.