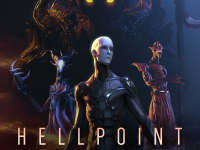 If the idea of a Dark Souls set in the universe of Dead Space gets your blood pumping then you will be glad to know we have something like that coming with Hellpoint very soon. No, the game is not linked to the others in any form but how Cradle Games and tinyBuild are describing it before it releases on the PS4, Xbox One, PC, and Switch. Do not let that detract anything from Hellpoint, as it is always a weird thing to try to compare to other titles before launch. We will know for certain if it needed all of that on April 16th, though, as that is the set down a release date for the game as of now.

Now that the release date is set for Hellpoint, that means we also have a new trailer to look at for the game to get the hype flowing. You can obviously see that below, if you have not already skipped on down already. We get to see all parts of the game here from the horror aspects to a bit of how the combat will flow. I will say that the description above does seem to fit Hellpoint as stated there. With the differences as one would expect to make sure the title feels like its own. This is all recorded footage and not how it will feel in our hands, so that could change, but it looks like it could be solid. Only a few more months to wait and know for certain.

Hellpoint is a dark and challenging action RPG set in a heavily atmospheric sci-fi universe where the line between science and occultism is blurred.

You wake up in the derelict Irid Novo space station, in orbit around a supermassive black hole. Fight dreadful creatures, face the Cosmic Gods and unravel their twisted story.

Have you been waiting for Hellpoint to finally come or is this the first you are hearing about the game? Do you think that it looks as described there or should the other titles be ignored to better fit this game? Does this sound like something you have been waiting for or does it look like it will be a scary slog only a few will be able to handle? Let us all know down in the comments and then feel free to discuss it all. If there is anything else to share for Hellpoint, we will have it all here for you. Just be sure to keep checking in here for more of that and other titles yet to come.