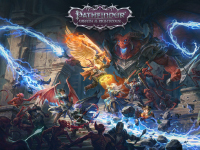 The Kickstarter for Pathfinder: Wrath Of The Righteous is now open and we have a bit more to see for how this will expand the Pathfinder video games

We all knew it was coming and now the Kickstarter is up and running for Pathfinder: Wrath Of The Righteous so we can help fund the extra parts that the team might not be able to do on their own. As of right now, Owlcat Games has the funding to complete the game but it might not be in the best form or have everything that we want in there. This is why they have opened up the campaign and are looking for extra funding. That and to be able to make sure we have all of the extras in this version of Pathfinder that we could have been looking for. Now if only we could get a dedicated turn-based combat system mixed in, I would be fully happy when this hits the PC in the future.

While all of that may sound a bit off here for the game, it is about right and it currently looks like Pathfinder: Wrath Of The Righteous is over two-thirds of the way there as of this posting. This does mean that we might be able to get all of those stretch goals and maybe even more of the new Mythics that will be part of the new game system. These would be the different paths we can take down the story of the game via our choices and actions. There are only six listed for us here, but I have a feeling that if the campaign kicks off well we could see so much more mixed in from the tabletop version of Pathfinder that we never knew we wanted. Given how the campaign is looking, I am sure that will be the case.

Are you ready to travel into the Worldwound and fight the demonic hordes? What price are you willing to pay for power?

Are you excited to be getting another entry into the Pathfinder video game world or are you still trying to complete Kingmaker? Would you like to see a true turn-based system mixed in for combat or do you like the free-flow nature of what we had before? What else would you like to see make the leap over from the pages to the digital? Let us have all of that and more down in the comments and then feel free to discuss. When there is more to share for Pathfinder: Wrath Of The Righteous, we will share it all here. Be sure to keep checking back for all of that and much more.