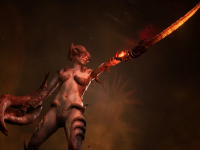 There is another enemy lurking in the world of Succubus and we have a nice new teaser video to look at for it. This one here is called the Amazon and is the next baddy that Madmind Studio has crafted for us in the game. Something that looks a bit like the Succubus in stature but does have some different weapons and motions to be used against us. The reasons why are still murky, but it is more for the game to look at as we wait for a full gameplay trailer and a release date for when we can actually play the game on the PC. I guess it is good that we have the title, Agony, to keep playing now as it is what spawned this one.

You can see more of the Amazon in motion down below as the Succubus dispatches a few. It does look like these will be a bit more formative of an enemy here and maybe have a bit of ranged capabilities too. That is the assumption here based on the little we have and that we do not get to see one possessed in the video. Maybe they are immune to this ability in the game and that is why they are such a threat in Succubus? We will have to wait and see as future updates come out there. For now, have a look and see what we may be getting in the final build of the game. Maybe…

The main character of the game is Vydija, a wild and lustful Succubus demon. The players were able to learn a part of her story in the original Agony and Agony Unrated, where she received her own single-player campaign.

With the disappearance of the legitimate rulers of Hell, the remaining demons recognized Nimrod as their ruler, because he was the only soul who could dominate the mind of the mighty Beast. By raising his new empire from the corpses of sinners, the new king, along with his new queen Vydija, managed to control the chaos left by the former rulers.

The new title didn't fit the Succubus. The life of luxury and walking on rugs sewn from the skins of martyrs was not for her though, and so she has chosen a life in the wilderness of Hell.

During her travels, the new queen meets the powerful Baphomet who, together with his army, is going to get the soul of Nimrod. Captured, maimed and betrayed by her own species, Vydija is left with only one goal that matters – revenge!

What do you think about this new enemy type for Succubus? Could it be one of the new ones that can be immune to her possession ability or is that just left out of this short clip? Do you think they do have some ranged attack or was this just the player taking advantage of the environment instead? Let us have all of those thoughts and feelings down in the comments and then feel free to discuss it all. When there is more to share for Succubus, we will share it all here. Be sure to keep checking back in for all of that and much, much more.