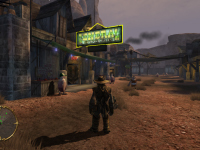 Get into the Oddworld universe again with Oddworld: Stranger’s Wrath HD as it launches on the Nintendo Switch Now

Get ready to add some fun and quirky gaming fun to your Switch as we now get to see Oddworld: Stranger’s Wrath HD join the ranks of all the titles on the device now. It has been some time since the original version of this title came out and then the first HD remaster that was out there. It was only a matter of time before Oddworld Inhabitants brought it over here to give the enjoyment to many more gamers. It may not be the most current Oddworld, but it was one of the more solid entries into it all and the HD version was amazing back on the PS3 so I can only imagine it being a nice addition here. This could be a bit of nostalgia on my part, but I still think it is worth it.

For those who do not remember Oddworld: Stranger’s Wrath from before, this is a fun platforming title where we take on the role of a fun bounty hunter in this universe who also refuses to use guns. He has some health issues and needs to take some jobs to keep himself alive. This is when he takes up arms with his crossbow and various critters for "live ammo" to take down the various bounties in the game. It is as fun as odd as it sounds. If you are curious on how Oddworld: Stranger’s Wrath HD was before now, you can catch our review and get a better understand of what just hit the Switch.

Stranger is a bounty hunter that doesn't care for guns. Join him and his quirky assortment of Live Ammo — critters that you can fire from his crossbow — as Stranger bags enough bounties to pay for his surgery and finds himself caught up in a greater struggle.

Are you excited to have another option to play Oddworld: Stranger’s Wrath HD now or has it been too long for you to dive into the game again? Do you think we will ever get another title in the same vein here or will this be just rehashed over the years to keep the nostalgia rolling? Are you just looking for a fun title to add to the Switch and need a good suggestion like this one? Let us know all of that down in the comments and discuss it as you wish. When more for the Oddworld franchise in general releases, we will have it all here on the site. Be sure to keep checking in for all of that and much more.