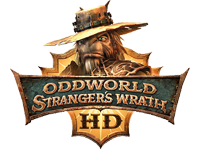 Now that I have that out of the way, just like when God Of War got the HD treatment, I see why they chose to do this six years later. This is the version of the game I think Oddworld Inhabitants wanted to make for the XBox but the technology just wasn't there yet. While the game play didn't get a full overhaul, the visuals completely did. Outside of being a little dark, in the lack of lighting sense, everything is visually spectacular.

Also, unlike other "HD" upgrades, everything got the face lift here. To go back to the GoW example, the cut scenes, pre-rendered or not, lacked the upgrade visually. In Stranger's Wrath HD everything looks up to par with current gen graphics. If I didn't know better, I would have sworn this was an original IP for the PSN and not an update to an old XBox title. In fact, I've had issues getting some people to believe it was originally designed back in 2005. Kudos on the upgrade to the visuals.

Now as far as the rest of the game goes, it is pretty much the same as one might have remembered six years ago. That is not a bad thing, but as the title says, this is just an HD version of the title from before. There are still a few camera glitches and the mission explanations/expectations still are a bit lacking, but it is really nothing all that game breaking.

I do have to add that I forgot how much fun I had with the "live" ammo of the game. By live ammo I mean that Stranger is shooting live creatures that have interesting side effects once passed through his cross bow. I won't even try to explain how any of these things would actually work, but who cares? That is all part of the fun of the game. Not to mention the standard humor of an Oddworld title. Anyone who's played one before knows what it's all about. Those who haven't, just YouTube some clips and you'll see what I am talking about.

As a heads up, I feel I need to inform you that even though the game looks sharp and is still full of the fun from years ago, this is not a title all will find entertaining. Most of the game revolves around Stranger going out and collecting bounties and returning them for Moolah. Just like most quests you would find in an average MMO. So if you don't find that kind of repetition overly appealing, don't say I didn't warn you.

In the end, I would recommend picking up Oddworld: Stranger's Wrath HD on the PSN. First off, there is a whole demographic that missed out on this title for the last six years and odds are that you were part of it. I also feel that this is the version that was intended for gamers to play and enjoy. When you look back at what was passable for graphics and compare them to what this HD version brings, you will likely have issue believing that this came out so long ago. Not mention the fact that it feels and plays like a full disc title and only costs $15.

Oddworld: Stranger's Wrath HD was developed/updated by Just Add Water for the PS3 on December 27th. A review copy of the game was supplied by the publisher for review purposes. It can currently be purchased off the PSN for $14.99.