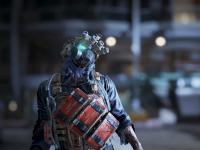 Here we go with the next big update for World War Z with the big Horde Mode Z update that many have been waiting for. This adds into the game just what you would assume it brings, as we have waves of zombies swarming us for us to kill. All with some fun twists added in by Saber Interactive to try to keep it feeling fresh. Just like other modes like this, we will see waves of zed in World War Z coming at our group of four that we need to kill. This will give us some resources to buy new weapons and make some upgrades to take on the next wave. There will also be a few hidden resources randomly spawned around the map and some other outposts for us to dig into and earn some other little bits too.

Okay, none of that sounds too different from other horde modes out there, but with this one, we are also getting a new type of undead in World War Z called The Bomber. The short version is that this is an EOD expert that has been turned and still had some explosives on them. In terms of the game, we will have these explosive zombies rushing us that we can blow up with one shot. We can do that or we can be precise about their takedown and bomb removal and earn some extra resources and items. The choice is again ours in World War Z with this DLC and I can see how this can shake up a match very quickly. You can see it all in action just below if you are not already out there playing it.

Saber Interactive, in partnership with Focus Home Interactive, has released the highly anticipated new Horde Mode Z update for World War Z, the best-selling, action-packed co-op shooter inspired by Paramount Pictures’ blockbuster film. Horde Mode Z throws waves of progressively challenging enemies at teams of up to four players, with increasingly bigger rewards for surviving. In between rounds, players can upgrade their firepower and defenses while scavenging for free pickups like heavy weapons and medkits.

Have you been waiting for this mode to finally come to World War Z or is it one that you will be skipping for the next big update? Does it make sense that an EOD expert would still have a ticking time bomb on them or are we trying to place too much logic in this video game? DO you think we are going to see more zed like this in the future or will we keep seeing completely new ones along the way? Let us all know down in the comments and then feel free to discuss. If there is more for World War Z, we will add it all here. Be sure to keep checking back in for all of it and more.