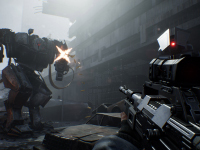 New gameplay for Terminator: Resistance gives us some new combat and other story aspects for how this Terminator story will play out

The new film is out and we still have Terminator: Resistance on the way with a launch for the PC on November 15th to be followed with a PS4 and Xbox One launch on December 10th. So many things are coming up for this franchise and it looks like Teyon is going to keep riding the current high of it all with this new title. Something that has always seemed would fit in well for a first-person shooter but has not been given an amazing showing of it yet. Notice that I said 'yet' here as it is looking like Terminator: Resistance could be doing just that as we finally have some solid combat gameplay to look at to see just how it has progressed and if it will keep the franchise rolling on in the wake of all of this.

As it should be easy to surmise, the combat for Terminator: Resistance looks to follow along the same lines of many of the other recent futuristic FPS titles we will not name here. This is not a bad thing at all as it is what is fitting for the franchise all about hunting down and shooting a bunch of killer robots. Something that was a plot point in a game outside of the Terminator franchise but it did not do as well as it should have. This is why I have a bit more faith here as this was a title built just for it and using some of the similar styles and mechanics that have been tried and tested over the years. Even though the "suck it up soldier" system for health does rub some the wrong way. I will take it, though, as long as the shooting stay up to the par we see here.

Terminator: Resistance is a single player first-person shooter from Reef Entertainment and Teyon, coming to the PlayStation 4 and Xbox One on December 10th 2019 in North America.

Releases on PC via Steam worldwide on November 15th 2019.

Thankfully, Terminator: Resistance does not seem to be all about the shooting and hiding as one would expect. Sure, the above video does show all kinds of that, but it looks like there will be a narrative to the game that will play out in a few different ways as we progress through the story and respond to different interactions. It looks like there will also be a bit of a crafting system mixed in as we scrounge for parts off of downed Terminators out there. All of which you can see in the opening bits of the game that we also have provided just below. It does look like Teyon has taken some time with it all to make sure this is not some quick cash grab for the Terminator franchise, but something we will want to play over and over. Have a look at it all just below now.

Terminator: Resistance introduces a new hero, Jacob Rivers, a soldier in the Resistance Pacific Division. Despite the fact that Jacob is just a private, he’ll soon discover that he’s been targeted by the latest threat from SKYNET and marked for termination!

SKYNET may be destined to lose this war, but at what cost to Jacob? Experience the events leading up to the decisive final battle, smash SKYNET’s Defence Grid and help decide the fate of mankind in the war against the machines!

How are you feeling about Terminator: Resistance after seeing the latest gameplay we have here? Does it look like it will be more than a franchise tie-in or will it be thrown into that pit of titles too quickly here? Do you think that it will handle the gameplay style well unlike the other title we have yet to mention that tried to do the same thing but outside of the franchise? Let us know what you are thinking down in the comments and then feel free to discuss. If there is more to share for Terminator: Resistance, we will share it all here. Be sure to keep checking back in for all of that and much more.