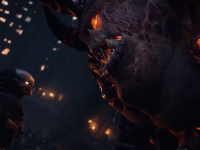 Well, we now know when Strife will be riding as the release dates for Darksiders Genesis have been set down for us all. Yes, you read that correctly. Release dates, plural. As it turns out, this little title from Airship Syndicate will be coming at us in waves and THQ Nordic will have it out there on the PC and Stadia well before it hits the PS4, Xbox One, and Switch. Good news for those looking for Darksiders Genesis on the PC as it will be landing on December 5th now. For the rest of the gamers out there, you can start playing it with your partner on February 14th. A nice little Valentine's Day experience to have I guess. Also right in the middle of all of those other big titles…

To go along with the announcement of the release date for Darksiders Genesis, we also have a new trailer to take in for the game. It is a CGI trailer for the most part but it gives us all a better feel for the personality for Strife. One that is way more playful and fun than we have seen in the past for the franchise. A nice breath of fresh air to me, even if I did love Death from Darksiders II the best so far. I guess we will see if it carries over to this game a bit better than seen so far. I know I am hopeful for that and now know when I need to wait to actually see it all in motion.

Darksiders Genesis features the debut of the fourth and final Horseman — Strife — who can battle alongside his brother and fellow Horseman War in the first-ever Darksiders two-player co-op mode.

Solo players will be able to alternate between Strife and War on the fly, taking advantage of Strife's ranged and War's melee style attacks. Both characters can build up a special attack meter that, when activated, temporarily turns them into a colossal creature that leaves epic destruction in its wake.

This Valentine's Day will be scarlet red and hot as Hell! Coming to consoles: February 14, 2020

Was this about when you were expecting to be able to play Darksiders Genesis or did you think it would all be one solid date for all platforms? Are you at all surprised that we are getting another split release or will this be the trend moving forward with all games? Do you think that we are going to keep getting this level of fun with the character or will some of it be lost in the style of game we have here? Let us all know down in the comments and then feel free to discuss. When there are further updates for Darksiders Genesis, we will have them all here. Be sure to keep checking in for all of that and much more.