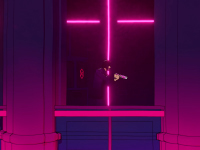 If you have been fiending for some new gun-fu action then you will be glad to know that we have a release date for John Wick Hex now set forth. That is, at least in terms of the PC version of the game as it has been laid down by Bithell Games that we will see it blasting at us on PC and Mac on October 8th now. Only a few weeks now and you can create and relive some of those amazing gunfights from John Wick and share them with your world. If that is how you want to play it for now. Those PS4 and Xbox One gamers will be happy if you do, though, as there is still no word on when they may be getting their chance at it all. It cannot be too far out, one would think.

Now that we know when John Wick Hex will be hitting, is there anything new to talk about besides the new trailer for the release date? Well, as it seems, we are getting the voice talents of Ian McShane and Lance Reddick to bring their characters back to life in this new form. Not overly shocking, but you can hear it here in the trailer. Also, it looks like we are getting the voice of Troy Baker playing a new villain just for John Wick Hex called, Hex. Kind of an odd choice, but it is what it is. Have a look and get ready to start playing this gun-fuel version of chess. Well, maybe not exactly chess, but we will need to play and strategize as if we were.

Publisher Good Shepherd Entertainment, in partnership with global content leader Lionsgate, has revealed that John Wick Hex will launch on Oct. 8, 2019, for Windows PC and Mac exclusively via the Epic Games store for $19.99. Developed by the acclaimed Bithell Games, John Wick Hex is fight-choreographed chess brought to life as an action-oriented timeline strategy game, capturing the series’ signature gun-fu fun and style.

Created in close cooperation with the creative and stunt teams behind Lionsgate’s hit franchise, every move in John Wick Hex hits like a scene from the movies, letting you feel like the legendary assassin himself. Each action you choose has risks and consequences, and each weapon changes the tactics at hand. Ammo is finite and realistically simulated, so time your reloads and make the most of the tools you find on the job. The game expands on the series’ universe with an original storyline, unique graphic noir art design, and the world-class voice talents of Ian McShane and Lance Reddick, reprising their iconic roles from the film franchise. John Wick Hex also includes the renowned voice acting talents of Troy Baker, who plays the titular mysterious antagonist, Hex.

On Saturday, October 5, game creator Mike Bithell and an array of special guests will host a New York Comic-Con panel on translating the unique world of John Wick into a video game.

Are you ready and fiending for John Wick Hex at this point or will it just be another title to entertain for a short while? Are you glad that even a few of the original cast is back again or do you think it will truly matter here? Can you see how it will play like chess or is that a bit of an exaggeration? Let us all know down in the comments and then feel free to discuss. As more for John Wick Hex gets out there, we will have it on the site for you. Just be sure to plan to keep coming back for all of that and much more.