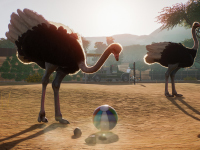 Next week will mark the start of the beta test for Planet Zoo for those who have pre-ordered the game. This is something I brought up before on the site. What was a little fuzzy back then was exactly what parts of the game would be available when it goes live on Steam. Obviously, we were not going to have access to the entire version of Planet Zoo when the beta goes live, as it will be Frontier Developments testing some of their online features more than anything. It does look like we are going to have access to some rather big parts of the game when it does kick off though.

When we load up the beta, we are going to have access to parts of Planet Zoo's Career Mode and Franchise Mode. Career mode being the main story of the game with the beta giving us the first scenario to play through. It will be pretty much a tutorial from the sounds of it, but something that will be needed to fully progress. Franchise mode, on the other hand, will be the sandbox version of Planet Zoo that will feature all of our built zoos and all the online trafficking of animals we could want in the game. This is also where all of the social challenges for the game and other community portions of the gameplay will kick in. I will venture that it will be wiped out before the full release of the game but it will be something for those who pre-order to experience.

For now, have a look at what will be heading our way for Planet Zoo in just under a week. I know I am looking forward to it and am excited to see just what will be going on in it all.

The Planet Zoo Beta begins next week on September 24 and running through October 8. The beta will feature the first scenario from Planet Zoo’s Career mode, a biome from Franchise mode and is available to fans who pre-order on Steam.

Have you already pre-ordered your copy of Planet Zoo or did you need this new push to do so? Did you figure that it was going to be more of the social aspects of the game that we would be testing for the team or did you think it would be more of the full game? What part are you looking forward to in the full game and could we see some of their other simulators get mixed in at a later date? Let us all know down in the comments about what you are thinking. When I have more to share for Planet Zoo, I will share it with you. Please keep coming back for all of that and everything else we have to offer.