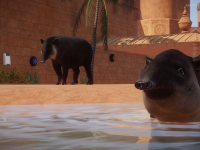 There have been ample opportunities for gamers to have a look at Planet Zoo in one form or another as we lead into its release. Something that is currently not that far off for Frontier Developments when it comes to the PC version of the game. Currently, that is the only platform for Planet Zoo but that could change given some of their past titles. This is not the focus, though, as we now have the gameplay that has been behind closed doors or only at specific events we all might not have been able to attend. Not to mention a bit more of an update on the upcoming beta for the game.

Here we have roughly eighteen minutes of gameplay for Planet Zoo that takes us down the various aspects of building the zoos and parks. This one all set in an Indian Subcontinent theme with various animals found in a Savannah biome. We get to see how the entire zoo can be built piece by piece if that is how you want to go towards it. We also get to see how there are also blueprints for those who do not want to get into that grind. The more interesting part here for Planet Zoo has to be in terms of the animal's personalities and items we need to take into account. Things like animals being shy and uneasy with humans around so there needs to be a one-way glass wall set up to keep them at peace but also keep patrons happy.

Have a look at what you may have missed for Planet Zoo at the various events and other showings out there. If it piques your interest, there is a beta for the game running from September 24th to October 8th if you select to pick up the Deluxe Edition of Planet Zoo. If this is your style of game, then you might want to go all-in as the developers seem to have done.

Welcome Zookeepers to this very special gameplay reveal video for Planet Zoo, showing off the Savannah biome, a brand new Indian Subcontinent theme, and some new animals for you to spot!

The Planet Zoo Beta is running from 24 September to 8 October 2019 and can be accessed only by pre-ordering the Planet Zoo Deluxe Edition on Steam.

Are you excited for what you get to see here for Planet Zoo or is there still so much more you need to make that sell? Were you expecting things to be so micro-manageable in the game or did you think it would be more blueprints as we have seen in their past titles? How close do you think all of these animals will be to their real-world counterparts? Give us your thoughts down in the comments. As we find more for Planet Zoo, it will be added here. Just be sure to keep checking back in for all of that and much more.