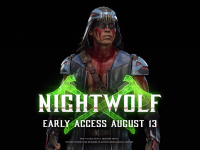 We now have our first look at Nightwolf for Mortal Kombat 11 just before he drops on the PS4, Xbox One, PC, and Switch. He is the next big character coming to the game on August 13th for those who already own the Kombat Pack. NetherRealm Studios is giving us all the early access for the character just a week before the rest of the players out there. I am hard-pressed to know someone who has Mortal Kombat 11 without having the pack as of yet, but it is something to note if you start seeing Nightwolf popping up before you have a chance to play.

As with the previously announced characters for Mortal Kombat 11, we also have a nice new gameplay trailer to look at with all the usual bells and whistles we should expect. Sadly, it does make it look like Nightwolf is one of the more generic fighters added in with what little can be taken in here. Almost like they are bringing a version of Green Arrow over into Mortal Kombat 11 from Injustice and tossing in a dash of Kotal Kahn. That is my quick take on it all. You can have a look at the latest for the character just below and see if you agree. Only a few more days to truly find out though.

Nightwolf, born as Grey Cloud, is a proud and fierce warrior dedicated to the cause of good and chosen by the Great Spirit to become the Matoka tribe’s champion and protector. Along with his signature tomahawk swing, Nightwolf possesses extraordinary magic that allows him to manifest weapons created from spirit energy to fight for the Matoka’s future and defend all of Earthrealm.

Nightwolf is the latest playable fighter to join the Mortal Kombat 11 roster as part of the Kombat Pack, alongside Shang Tsung (available now), Sindel, Spawn and two guest characters to be announced at a later date. In addition to one-week early access for Nightwolf, Kombat Pack owners will receive the Klassic Arcade Fighter Skin Pack featuring Jax, Kung Lao, and Kano, as well as the new War Games Sonya Blade Skin.

What do you think about Nightwolf that we have here for Mortal Kombat 11? Does it feel like a mashed-up character as I described or does he feel like a truly new character with the same history we know? Who do you think will be next and the other two hidden characters to be announced? Let us all know down in the comments and then feel free to discuss. When there is more for Mortal Kombat 11, we will add it all to the site here for you. Just be sure to keep checking in for that and much more.