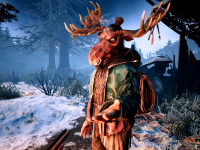 In just a few more days we will have the big expansion for Mutant Year Zero: Road To Eden drop on us for the PS4, Xbox One, and PC. Not only that, but the game will be dropping on the Switch on July 30th with everything too. All the greatness that The Bearded Ladies have crafted for us and a bit more. I mean, that is what expansions for Mutant Year Zero should be. Obviously with the new story bits and a whole new stalker for us to play and experience. All for the nice low price of $14.99 USD if it is still something you are into.

If you have not seen the concept and earlier footage of the character, we are getting Big Khan for Mutant Year Zero. This would be the half-man and half-moose character. If we go by the new trailer we have here, he may spit fire too? That could just be all the hype for the character and extra hours of story we are going to be getting though. I will go with that assumption more or less. Have a look and see what we are going to kind of get here. There is also a little bit of gameplay mixed into it all too. But only a little bit.

The expansion will not only contain hours of additional gameplay, there will also be new locations to visit and a brand new playable character, Khan the Moose!

Is this the Mutant Year Zero DLC you have been waiting for or will you be holding off? Do you think that Khan will be spitting hot fire or is that all just the promo stuff to let us know? Will you be jumping into the game for the first time on the Switch instead? Go ahead and let the world know down in the comments and then feel free to discuss. If there are further updates for Mutant Year Zero: Road To Eden, we will have it all here for you. Just keep coming back for all of that and more.