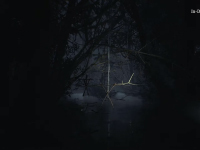 Here we go deeper into the woods of the Blair Witch, as new gameplay footage is out there before the August 30th release date. Not that surprising that we would be getting it at this point and I will not scoff at what Bloober Team is willing to share. Especially given how their past titles would work extremely well for the franchise here. You can see that very well when looking at this new footage for Blair Witch. Thankfully, there is also a bit more to it all mixed right in too than just watching a walking simulator in the woods.

One thing that we get to see here is a bit on how the dog companion in Blair Witch will play in. There will be a relationship mechanic between us and the dog that we will need to watch out for. There will be various things we need to do in the game to keep up the relationship, but the only one described here is giving head scratches. We will have to mix it up with the other options too all so we can make sure he will keep helping out in the game. It sounds like he will alert you to the minions of the Blair Witch and possibly even attack for you. We also will not need to worry too much about his wellbeing outside of that as this is not an escort kind of deal.

Speaking of attacking, something new from the team for Blair Witch is the combat mechanics coming. If you want to call them that as it sounds a lot like what we had in Alan Wake without the guns. More or less, we will need to aim our flashlight at the minions in the game to make them go away. You can kind of see that in the video just below. It also sounds like a perfect fit for Blair Witch and for the team to take the step into adding stuff like this into their titles. Have a look at it all below and get ready for the fear.

Elise joins Cork and Leo to help deflate some tension in Bloober Team’s foray into the Blair Witch Cinematic Universe.

Blair Witch is coming to Xbox One and PC on August 30.

Has Blair Witch caught your eye more now that we have more gameplay? What other ways do you think we will have to use to keep the dog in high spirits with us? Does the combat sound a lot like what we mentioned or do you see it being its own true thing? Let us all know down in the comments and then feel free to discuss. When we have more for Blair Witch, we will add it all to the site. Just be sure to keep checking in for that and everything else we can get our hands on.