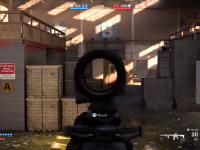 New gameplay for Call Of Duty: Modern Warfare is here to show off the new multiplayer mode coming to this version of Call Of Duty

Well, that headline may seem a bit off as I would hope that you would expect to have a gunfight in a Call Of Duty title, but this one may be a bit different than you think. In fact, what we are talking about here is a new gameplay mode that Infinity Ward is placing in the multiplayer side of it all. Not the most creative of titles for the mode, sure, but it is what we are getting here in Call Of Duty: Modern Warfare. To go along with the name we also have a look at the first raw gameplay for the mode and just how the game is looking. All on the PS4 version of the game although I am certain it will look just as nice on the PC and Xbox One.

Here we have Gunfight for Call Of Duty now. This is a new 2v2 multiplayer mode that uses more close quarters to amp up the matches. You know, because they were not already insane in the game. No, we have something that will be a lot faster paced. As you can see in the new footage, the players can get through quite a few matches in Call Of Duty: Modern Warfare in under six minutes. If that is the kind of gameplay you are looking for, you can now get overly excited. For the rest of us out there, we might want to look somewhere else as it runs about as you would expect it to here.

And Gunfight is only a fraction of what’s to come. Learn more about the multiplayer universe on Thursday, August 1st during the Call Of Duty: Modern Warfare Multiplayer Gameplay Premiere!

Now that we have the new mode for Call Of Duty, what do you think? Do you think that the matches are already too fast or will this quench a thirst you have wanted in the multiplayer of the game? Is this something that the fans have been asking for or did I miss something again? Let us all know down in the comments and then feel free to discuss. When we have more for Call Of Duty: Modern Warfare, it will be up on the site as soon as possible. Be sure to keep checking in for that and much more in the future. We will not let you down.