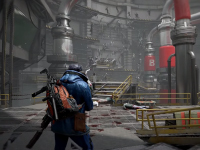 There are some of you out there who may have thought that World War Z was a bit too easy and those of you are true masochists in the gaming community. While I am not saying it was controller breaking levels of difficult to get through chapters, Saber Interactive did craft a game that offered up a nice challenge with all of the zombie killing action we could want. They are not leaving the masochists out though as we now have a new update for World War Z that adds in a new six skulls challenge to play and try to survive. This being the most extreme we have seen as five skulls was the top before today.

With the new difficulty also comes new rewards to be had in World War Z. All of which seem to be coming in the form of special weapons to show off your prowess and hatred for yourself to unlock. One being a new melee weapon you get for just beating one chapter on with this new setting. The second being a new sniper rifle that unlocks after beating the entirety of World War Z again on the new difficulty. It is at least skinned with something that will show the world you have no care for yourself and need to be challenged all the time. You can see both of these weapons in the following video as well as the other updates that will be rolling out soon.

Saber Interactive, in partnership with Focus Home Interactive, has released the free "Six Skulls" update for World War Z, the action-packed co-op shooter inspired by Paramount Pictures’ blockbuster film. This latest content pack introduces the new six-skull extreme difficulty setting for all chapters released so far. More than ever, these challenges demand careful resource conservation, a strategy to cover every corner and truly skilled trigger fingers, with unique rewards available for those brave enough to take them on.

The “Six Skulls” update follows the recent addition of “The Undead Sea” patch, which opened up a totally new mission aboard an undead-infested ferry in Tokyo, as well as a terrifying new zombie type to battle. In the near future, the team plans to release “The Big Update,” free DLC which will feature a new weekly challenge mode, as well as a number of weapon variants, character skins, and accessories.

Did you think we needed a new way to challenge ourselves in World War Z or is this just a crazy level you never wanted to come? Are you a bit shocked at the specific rewards we will get for beating the game on this difficulty or will it make you strive just a bit more? Do you think that you and your squad are truly ready for this undertaking or will you be too scared to try now that you know what is coming? Let us all know down in the comments and then feel free to discuss. When we have more for World War Z, it will be added to the site. Keep your eyes open for all of that soon…