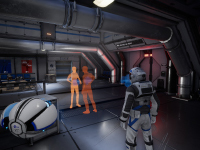 Deliver Us The Moon

For all of those console gamers out there who may have felt like they missed out on Deliver Us The Moon, it is time to ditch those feelings as the game is officially heading to the PS4 and Xbox One sometime in 2019. To that extent, if you are one of those PC gamers out there wondering when KeokeN Interactive was going to hook you up with the ending you have been waiting for to the story, you will be getting that at the same time. All of which is thanks to a new partnership between them and Wired Productions to bring Deliver Us The Moon to as many gamers out there as possible. It is nice when that all plays out for the best.

In terms of when we will be able to see all of this for Deliver Us The Moon, it has been left rather vague and just now that it can be any day between now and December 31st. Of course, that is barring any possible delays that could come up and other various factors that could push it out. This is just the current plan so there will be some kind of closure for the whole community out there. Let us all just hope that everything runs smoothly for Deliver Us The Moon and everything plays out just as expected.

Deliver Us The Moon — Dare To Leap

We are to unveil a stellar new partnership to bring the full release of space sci-fi epic Deliver Us The Moon to PC & consoles in 2019!

It’s one small step for man… one giant leap for #DeliverustheMoon!

Major News: We’ve signed with Publisher @WiredP and will launch on consoles later this year, alongside releasing the explosive conclusion to the game on PC!

Were you one of the holdouts for Deliver Us The Moon to hit the consoles or were you playing on PC since last year? How are you on the story thus far or did you hold off until you had the whole experience ready for you? Do you suspect that this partnership is going to go further than what we know so far or is this going to be it? Let us know what you are thinking down in the comments and then feel free to discuss. As the updates for Deliver Us The Moon roll out, we will place them all up on the site. Be sure to keep checking back in for all of that and more.