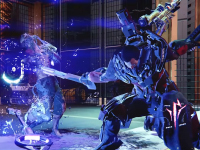 We finally have some gameplay for The Surge 2 to take in and see more than the cinematic changes that have been placed into the game from Deck 13. I know all I have seen in the past for the game has been some fancy pre-rendered trailers but now we see all of the limb-slicing and robot dodging action that we should have expected for this franchise. That and how some of the new online features will work in The Surge 2. Something I am sure will cause some issues in the game, but it is what it is. We will see more on it this September 24th for the PS4, Xbox One, and PC.

Right out of the gate, we can see how far the visuals for The Surge 2 have brought the franchise here. It all looks amazing and definitely more open that we knew from before. A good thing as we will need to use the environment to our advantage in certain points to bypass combat that we have no chance of surviving. All of which is shown off during the opening of this footage. As well as all of the limb-slicing and upgrading mechanics we loved in The Surge the first time around. That and an epic boss fight that shows off how the AI and everything has evolved. It is shaping up to look as cool as the trailers now.

The Surge 2 is coming to PlayStation 4, Xbox One, and PC on September 24, but before you return to the sci-fi post-apocalypse with ax in hand, let developers Deck 13 talk you through the world, dangers, and changes coming to The Surge 2. Today’s Dev Gameplay Walkthrough is narrated by Adam Hetenyi, Head of Game Design at Deck 13 Interactive. See the massive new levels, the return of uncompromising and brutal combat, now as intense as ever, as well as brand new features like asynchronous multiplayer and drones.

Also shown off are the improved bosses of The Surge 2, inside new environments with stunning variety between the high walls of Jericho City and its various parks and suburbs. The new and enriched move sets combined with directional blocking alongside character customization, more weapons, more implants, and more armor sets mean your character is truly your own in The Surge 2.

Players who pre-order The Surge 2 at participating retailers will receive the URBN Gear Pack DLC for free, which includes an armor set, two weapons, one drone, one module, and a bonus online message icon (check listings for local availability). The Surge 2 Limited Edition is also available for pre-order, including an exclusive lenticular cover, an 8-page comic book, a massive double-sided poster, and three lithographs. The Limited Edition is available from select retailers worldwide.

I am a bit curious on the graffiti and tagging part of The Surge 2 as it comes to the social and online aspects. There is a small breakdown of it here, but it sounds like we can leave messages for others by drawing and not a message system like other titles that do the same thing. This could be me misunderstanding what they are talking about based on what we saw, but it does sound that way. Unless Deck 13 has placed in a lot of icons to splash around to indicate all of the various enemies and things in The Surge 2, I can see a lot of penises and hate icons going around. I have zero faith in humanity as an FYI.

All of that said, how are you feeling about The Surge 2 after seeing this gameplay? Does it look like an advanced version of the last title or can you see all of the other upgrades placed in here to make it feel like a true sequel? How do you think the online portion will be handled outside of the basics we have here? Let us all know down in the comments and then feel free to discuss. For more on The Surge 2, be sure to keep coming back here. We will keep all of the news and updates coming at you as best as we can.