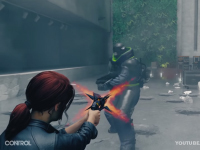 The day is finally here, as we now have a look at more of the combat we will get to experience in Control this coming August. Not only the combat but also a bit more the game's main enemies we will have to worry about as we try to liberate The Oldest House from the grasp of the Hiss. There is still not much on what exactly they are, I am sure Remedy will save that for the game, but we do have a look at just what we will get to use in Control to bring them all to an end. Well, at least some of the weapons and abilities we will have in the game. I am sure more will be held until August 27th instead of having it all out there now.

With that all said, what we do get to see in the latest developer diary for Control does focus in on the main gun Jesse will use during the game. It looks to be like a normal gun with the ability to charge up and shoot through walls and cover. I am also going to venture a guess that it will come in with certain enemy types as they have their own "walls" and shield we will have to deal with. That is where the special powers come in too, I am guessing. Something else we get to see very little of here for Control. It is at least something to keep us going and talking about this title that seems to have so few people covering lately. So odd as it looks so amazing.

Control — How To Fight The Hiss

How would do you fight the Hiss in Control? In our latest Control dev diary, Mikael Kasurinen (Game Director), Paul Ehreth (Lead Designer), Thomas Hudson (Senior Game Designer) and Sergey Mohov (Game Designer) discuss the Hiss, Control’s main enemy and ways to battle against it.

If that was not enough, even though I was not able to check out Control on the show floor of E3, there were many others that did have the chance. They also had the chance to show off more gameplay for the game in full motion and without Remedy talking over the voice work in the game. You can see almost twenty minutes of this gameplay just below to see the above weapons and powers in action while taking out the Hiss. Something that I truly hope is an acronym in Control and not just a name was thrown out there for us all to enjoy. I am sure it is the latter, though.

How are you feeling about our weapons and powers in Control after all of this and will it make for a better game along the way? Do you suspect that there will be other and bigger things for us to use in the game or will this truly be it for now? Do you agree that coverage of this game is a bit lax and everyone should be talking more? Let us all know down in the comments and then feel free to discuss. As we get more to talk about for Control, we will do just that here. All you need to do is keep checking back in to see and hear it.