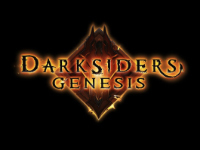 Many of us before and during E3 were hoping to see a new Darksiders game come out and it was teased heavily before the event. It was also revealed by THQ Nordic that we were actually going to be getting another entry in the series from Airship Syndicate that would take us all down a different path for the gameplay. At least we have the final horseman to join us for this ride. Something I am looking forward to after having a bit of time with Darksiders Genesis and knowing there is still time to update and alter things that may not have flowed just right.

To start off for Darksiders Genesis, the game takes place thousands of years before the events of the first title as far as the story goes. The riders are still fairly new to it all and we get to join War and Strife this time in the mix of it all. While there will be elements from the other games fans will notice, do not go in thinking you are going to get all the cool things that War had in your games. It makes sense in that aspect, and will most likely start the path for where Darksiders and the other core sequels took the franchise as they came out.

From the dawn of creation, The Council has maintained the Balance across existence. Carrying out their orders are The Horsemen, Nephilim (powerful beings spawned from the unnatural union of angels and demons) who have pledged themselves to the Council and been granted immense power. However, this power came at a tragic cost: the Horsemen were ordered to use their newfound strength to wipe out the rest of their kind. What followed was a bloody battle on Eden where the Horsemen, obeying the will of the Council, annihilated the Nephilim.

Still reeling from the events on Eden, War and Strife have been given a new assignment — Lucifer, the enigmatic and deceptive demon king, has been plotting to upset the Balance by granting power to master demons throughout Hell. War and Strife must hunt down these masters, gather information, and ultimately fight their way through a tangled, demonic conspiracy that threatens to forever upset the Balance and unravel all of creation.

Darksiders Genesis is an action/adventure that tears its way through hordes of demons, angels, and everything in-between on its way to Hell and back with guns blazing and swords swinging. Genesis gives players their first look at the world of Darksiders before the events of the original game, as well as introduces the horseman Strife.

Now that we have a bit of the story, we can look at the gameplay. Something that was left a little out of context for me when playing the demo I did for Darksiders Genesis. Something that felt a little like a blending of the core franchise and a bit of Diablo. Obviously, that is what it also looks like in the trailers, but there is a bit more to it than that. Sure, we have the basics like walking around, using our weapons, and using our special attacks. There is also an interesting option to swap characters on the fly to allow one to heal slightly when not in use.

Okay, Darksiders Genesis sounds a lot like the other game, but it feels like Airship Syndicate only took the great aspects of that game and then added in the twists from the other to help drive home that this is still a Darksiders game. We still have the combos and ranged weapons we can swap between in the levels, as well as the ability to switch into the Chaos form for both characters when the meters are filled up. War playing a bit as we knew from before and Strife turning into a chaingun-wielding maniac dropping mines all over the place. Great for crowd control and ending a fight really fast.

If you were one of those gamers that truly loved the platforming aspect of Darksiders, know that it is in here for Genesis too. All of the classic things from wall-running to gliding to jumping from pole to pole is back in here. The controls to do the pol jumping did not feel as intuitive as most of us would know, but that could all stem from not having a true tutorial in the demo I had hands-on with. After a few tries it became easier, but Darksiders Genesis uses a different scheme that fits the 3/4 view style of game it is. We cannot make it an easy run to loot everything after all.

Speaking to that, another way Darksiders Genesis stands out from a clone of a different title is that there are many things hidden and secret chambers to be found as in the core franchise. Not just in break this wall kind of way, but in the use of the platforming and other aspects of Darksiders from the past. There is still the bomb puzzles and the multi-shot style puzzles mixed in to keep it grounded in the universe. Something I originally missed as I was playing it like a Diablo clone and expected things to play that way. This is not the case and it offers up some great rewards for exploring each area.

After all of that, I will say I am still a bit on the fence for Darksiders Genesis. I am one who plays these games for the lore, so I am sure I will get sucked in with that and Strife's humor, but it will take a bit to get used to the hybrid gameplay I was able to experience. As I said, maybe in a different setting and having a chance to play through a tutorial the controls would have been a bit smoother. All things I am hoping to see hashed out before Darksiders Genesis launches this year on the PS4, Xbox One, PC, and Switch. Time will tell.