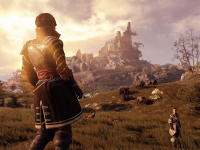 It looks like we have another game that could not wait until E3 to blow its load with all kind of updates and this one is GreedFall. You know, that little game that Spiders has been working on for a while now that will give us yet another fun RPG adventure. I am sure you do. If not, then get ready for a new recap in the way of the story trailer for GreedFall that is being debuted for this year's E3. The game hits the PS4, Xbox One, and PC in September, so it makes a bit of sense that we get the hype train rolling for the game. At least for those scratching their heads still after they clicked in here.

As mentioned, we have a new story trailer for GreedFall to take us into the world of the game and offers a look at the enemies we will encounter. There is also a look at what will be the main issue in the game where the new settlers and the natives are fighting over the Guardians of the land and what brings all of the magic in there. GreedFall is honestly looking to be an alternate version of American history when I look at it, and I am getting further excited with each new update like this. Have a look at the latest story trailer for the game and join in on the excitement for the game. That or keep scratching your head wondering what the game is all about.

GreedFall, the latest RPG from Spiders, invites you to explore the magical island of Teer Fradee in its E3 Story Trailer. Emphasizing freedom and player choice, forge your own destiny when GreedFall releases in September 2019 on PlayStation 4, Xbox One, and PC.

Today’s trailer dives into GreedFall’s epic story and setting, as settlers, mercenaries, and treasure hunters depart the old continent to converge on a remote island seeping with magic — rumored to be filled with riches and lost secrets. On the hunt for a cure to save your home continent from a devastating disease, you find yourself in the middle of ever-increasing tensions between the invading settlers and the local natives protected by supernatural Guardians, the manifestation of the island’s magic.

You can progress and succeed in quests through a multitude of paths. Whether utilizing combat, diplomacy, or deception, the way you reach your objectives depends on your choices and how you choose to develop your character. The island of GreedFall is a living, ever-evolving world. Your actions, from seemingly trivial choices to the most important political decisions, will influence its course and, ultimately, shape your story. Do you like where the story of GreedFall looks to be going here or are you still curious as to what the game is all about? Do you suspect that we will have a better showing on the floor of E3 or will we still get the smaller updates like this until launch? Do you agree in the parallels I was drawing here or am I way off base yet again? Let us all know down in the comments and then feel free to discuss. When there is more for GreedFall, we will update you here on the site. Be sure to keep checking in for all of that and more.