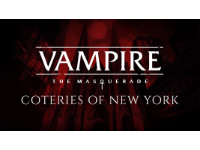 If you were hoping for more from the World Of Darkness, then get ready for Vampire: The Masquerade — Coteries Of New York to come to your PC and Switch. Yes, we are getting another title in that line of the franchise with Draw Distance going into the new lore of the recent 5th edition of the IP. Not some spin-off of Bloodlines 2 or another build up to the Werewolf title in the works either. Even though this Vampire game is fully licensed by Paradox, it looks like it will be kept out of all of the other stuff going on. Which is fine as this is a new narrative game for us to experience. Also, not to be confused with the other one in the works from a different developer too.

All of that aside, Vampire: The Masquerade — Coteries Of New York looks to take us into the inner workings of New York and the faction divide between the Anarchs and the Camarilla in the modern nights of the franchise. We will select one of the various vampiric clans to be part of and use our powers and dialog to further agendas and reach one of the various endings the game offers up. In Vampire an ending usual means the death of you and yours, but I am guessing that will be different as it is being touted to be highly replayable. I guess we will see in Q4 of this year when it is slated to hit the above-mentioned platforms.

Vampire: The Masquerade — Coteries Of New York presents the conflict between two vampiric factions: the traditionalist Camarilla and the fiercely independent Anarchs among the iconic landmarks and night lights of The Big Apple. It’s a unique, atmospheric, single-player narrative experience, set in a rich, fully licensed, globally recognized universe of Vampire: The Masquerade 5th Edition.

The game does justice to the mature themes of the World of Darkness, and takes advantage of the excellent atmosphere of the source material. It also creates new stories, which, thanks to the full creative license, will be incorporated as official lore of Vampire: The Masquerade 5th Edition.

How are you feeling about getting another title in the Vampire: The Masquerade line of games? Are you glad to see that it will be going with the 5th edition of the game or were you expecting it to go with one of the more classic versions? Do you expect to see more of the disciplines in this game than the others or will they only be the social ones given the narrative nature of this game? Let us all know down in the comments and then feel free to discuss. When there is more to share for Vampire: The Masquerade — Coteries Of New York, we will share it all here. Just be sure to keep checking back in here for all of that.