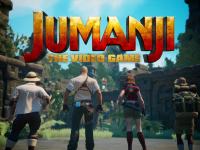 It has been announced that Jumanji: The Video Game is on the way and coming to us just before the next Jumanji film

It really seems like this should have been a while coming now, but Jumanji: The Video Game is officially announced and coming for us on November 15th of this year. Just in time to be out before the next in the film series. My guess is that Funsolve and Outright Games made sure to plan it that way even if it is not being called a film tie-in game at all. Something that has not been stated for Jumanji: The Video Game mind you, but it will be using the likenesses of all of the current cast members of the film. If they will actually voice the characters is yet to be heard, but you will be able to join the crew on their adventures on the PS4, Xbox One, Switch, and PC.

In terms of details for the game, there are not much else besides the following trailer showing off the Jumanji crew and the title. Well, that and a few screenshots that make this look like an action-adventure game with some puzzles and traps mixed in. Mix in the fact that you can play co-op with all of the characters online or via split-screen, I think we have hit everything we know as of now. My guess is that the characters will also keep the stats and abilities they were known for in the previous Jumanji film. Maybe we will be able to actually play out some of the kick-ass fight scenes with Ruby Roundhouse or be the full action hero as Dr. Smolder Bravestone was made to be in the whole thing.

Releasing November 15th, 2019, Jumanji: The Video Game puts you in control of Jumanji’s greatest heroes as they seek to find the precious Jewels of Jumanji, save the world and find a way home. What’s stopping them? Only a deadly array of exotic creatures, dangerous locations and an army of evil marauders.

Unite with up to three friends on this hilarious adventure in online or split-screen modes, as you tackle all-new Jumanji environments and choose your hero from Dr. Smolder Bravestone, Ruby Roundhouse, Franklin “Mouse” Finbar, or Professor Shelly Oberon and combine their unique abilities to keep one another alive.

Jumanji: The Video Game is based on the wildly successful film franchise that began in 1995 with Jumanji and has gone on to produce the box office hit Jumanji: Welcome to the Jungle in 2017 as well as its highly anticipated sequel releasing this December.

Does this announcement surprise you or is this the start of the film tie-in video games again? Will this stick close to the recent Jumanji canon or will it expand upon it all before the film? Did you expect to see a title like this a lot sooner than now or does it make sense given the state of the franchise? Let us all know down in the comments and then feel free to discuss. If there is more for Jumanji: The Video Game, we will have it all here for you. Just be sure to keep checking back in for all of that and more.