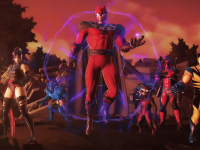 There was no hiding the fact that members of the X-Men were going to be in Marvel Ultimate Alliance 3: The Black Order. We have seen a few that have been in all iterations of the franchise to date and it would be odd if Team Ninja left some of the most popular characters out of the mix for it all. As it turns out, though, there are a few more in the mix on both sides of the coin for the team and their enemies coming to Ultimate Alliance 3 than we thought. Yes, you will be able to play more than just Wolverine in the game on July 19th. It also looks like some of them will be obstacles we will have to overcome too.

As you will see, it looks like Magneto, Psylocke, Beast, Mystique, and the Juggernaut among others will be mixed right in for Ultimate Alliance 3. So far it looks like the Brotherhood side of it all will be fighting you with Magneto having one of the Infinity Stones in hand, but the trailer alludes that they will be joining us on the fight. You can see it all in motion just below with the latest trailer for Ultimate Alliance 3. Not much more in the way of details are mixed into it all, but we do have some actual gameplay mixed right in. It is something I will gladly take and speculate on.

Assemble your ultimate team of Marvel Super Heroes from a huge cast including the Avengers, the Guardians of the Galaxy, the X-Men, and more! Team up with friends to prevent galactic devastation at the hands of the mad cosmic tyrant Thanos and his ruthless warmasters, The Black Order when the Marvel Ultimate Alliance 3: The Black Order game releases July 19, 2019!

Did you expect to have more other mutants and X-Men in Ultimate Alliance 3 here as we do or did you think it was going to be limited down a bit? Were you hoping to see more obscure characters mixed in or will they always play it safe with the big names moving forward? What other characters are you hoping will join in on the fun and will we get more of the street level heroes than we already have? Let everyone know down in the comments and then feel free to discuss. As we find more for Marvel Ultimate Alliance 3: The Black Order, we will add it to the site for you. All you need to do is keep checking back in for all of that in the coming weeks.