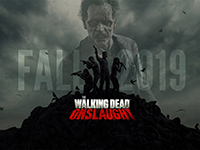 If you were sitting around wondering when we would be getting another video game set in the universe of The Walking Dead, wonder no more. We are here with yet another entry for the franchise and this one is coming in from Survios and heading to a VR setting instead of the myriad of other styles we have already had. Here we go with the announcement for The Walking Dead Onslaught. That would be the name and it is currently aiming for a Fall release for the Oculus and HTC Vive if you have them and a PC to run it. You can start with all of the happy dancing and joy now. At least if you were waiting for another game in the franchise to come.

Outside of the following announcement trailer for The Walking Dead Onslaught, little else is known. More so when you look at the following as non-gameplay and just a concept of what is coming. It is worth noting that it will place us directly in the middle of the TV version of The Walking Dead and have us playing as the characters in the VR setting. All with a new story to take in and a dismemberment system mixed in. I doubt it will be to the level of Dead Space, but it is worth noting. More so when you know that we will be doing it with our own motions and actions in the real world and translated into the virtual. Have a look at the announcement now.

Fight your fears head-on and step into the apocalyptic world of AMC’s global hit series “The Walking Dead” with the show’s official VR game, The Walking Dead Onslaught.

From AMC and Survios, the studio behind top-selling VR titles Raw Data and Creed: Rise To Glory, The Walking Dead Onslaught invites players to assume the roles of their favorite survivors from the TV series, struggling against the relentless walker threat while confronting both the horrors and humanity of this apocalyptic world. With an exclusive original story, visceral real-motion melee and ranged combat, player progression and a full campaign mode, AMC and Survios deliver the most immersive “The Walking Dead” experience yet.

How are you feeling about The Walking Dead Onslaught based on the little that we know so far? Do you think it will be more than shovelware to tie into the TV show or could it finally be a good game since the episodic ones? Which character would you like to play as in the game and do you think we will see characters from past show up? Let us all know down in the comments and then feel free to discuss. When we know more for The Walking Dead Onslaught, we will share it all here. Be sure to keep checking in here to see and hear it all.