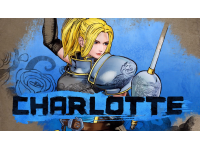 Another week has passed by and we have one more character revealed for Samurai Shodown with many more to come. Just as it should have been easy to assume, it is another fan-favorite character from the past of the franchise in the way of Charlotte. I am going to go on a limb and guess that we are going to be seeing mostly old characters coming back from SNK, as it has been so long that Samurai Shodown has been silent out there. I could be wrong, but it is not as if the game has had multiple sequels over the past years like other fighters, which would allow them to go out and craft new fighters. There is still a lot of time before June 27th, so maybe we will be surprised along the way.

In any instance, we have Charlotte here for Samurai Shodown and it looks like she will be bringing back the French swordswoman style this knight should be known for. Another knight or roses when you break it down, but it is a good thing, as this one at least looks effective. Of course, this is all while in the hands of experienced players and cut for marketing, but I am sure that your normal player can pull some of it off if they try. Just get your fingers ready for Samurai Shodown and you should be pulling off some sweet moves like this in no time at all. Have a look to see what I am talking about here.

In this week’s installment of Samurai Shodown’s weekly character reveals, we have fan-favorite Charlotte. This esteemed French swordswoman is a genuine knight who values modesty and martial arts over authority, and will protect her country at any cost. With her mighty rapier La Roche, her slashing attacks revolve around stabbing from a distance, avoiding body contact as much as possible.

Was Charlotte the character you have been waiting for in Samurai Shodown or are you still crossing fingers for a different one? Do you agree that we will mostly get to see classic characters given how the franchise has run thus far or will we get a few surprise new ones in there? What are the other characters you are hoping will show up in the game before or after launch? Let us all know down in the comments and then feel free to discuss. For more on Samurai Shodown, be sure to keep checking back in here. We will be back with the next character and other news as soon as it drops out there.