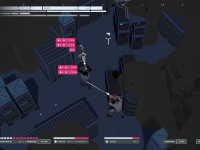 A new strategy title, John Wick Hex, is announced that will give you the fun of a strategy game with the gun fu flair of the John Wick franchise

It is kind of surprising that a John Wick video game has not been placed out there as of yet as it would seem right for a shooter style game. I know I am not the only one thinking this, but that does not change the fact that Bithell Games is now making one that is outside of the direct shooter genre. In fact, we now have word that we are going to be seeing John Wick Hex out there at some point as an action-oriented strategy game and not specifically a shooter. It may sound weird, but hold on to see if this will be the game for the franchise you will want to play on the PC and consoles. Thankfully, it is not due on the same date as the upcoming film so it will not be specifically a tie-in title.

In any instance, John Wick Hex is coming and will be a game in the strategy setting. It will house a completely new story for the character and bring in some of the cast to lend their voices, but oddly Mr. Reeves is not listed as of yet. While on this new story, we will get to play out and dictate all of Mr. Wick's moves and actions in the scene to try to recreate things we have seen in the John Wick franchise. At least as best we can using the art style used here for the game and the limited resources the character is not usually known for having. Outside of scenes that are supposed to give us tension in the films.

If this all sounds like something you have been hoping for, we do have a nice little trailer showing off just how John Wick Hex will look and most likely play like. It does have the added bonus of coming from a studio that is known for making some fairly top-notch titles too. When mixed in that it is only using the name of the upcoming film and not a direct portion of it all, there is some hope in the mix of all of the other terrible movie-based video games out there. Have a look and see what I am talking about here.

Publisher Good Shepherd Entertainment, in partnership with global content leader Lionsgate (NYSE: LGF.A, LGF.B), has announced John Wick Hex, the upcoming video game from acclaimed game director Mike Bithell (Volume, Thomas Was Alone, Subsurface Circular). John Wick Hex is a fast-paced, action-oriented strategy game that makes you think and strike like John Wick, the professional hitman of Lionsgate’s critically acclaimed film franchise, returning to theaters worldwide on May 17, 2019, with John Wick: Chapter 3 — Parabellum. The game is in development for consoles and will be available for Windows PC and Mac exclusively via the Epic Games Store at launch.

Created in close cooperation with the creative and stunt teams behind the films, John Wick Hex is fight-choreographed chess brought to life as a video game, capturing the series’ signature gun fu style while expanding its story universe. Players must choose every action and attack they make while considering their immediate cost and consequences. Every move in John Wick Hex feels like a scene from the movies, and every fight contributes to your progress on the job and requires precise strategic thinking.

Perform well and progress in the main story mode (which features an original story created for the game) to unlock new weapons, suit options, and locations. Each weapon changes up the tactics you’ll use and the manner in which you’ll play. Ammo is finite and realistically simulated, so time your reloads and make the most of the weapons you scavenge on the job.

John Wick Hex complements the style of the films with a unique graphic noir art design and features the world-class voice talents of Ian McShane and Lance Reddick amongst its stellar cast, with other cast for the game to be revealed later.

Was this the style of game you were expecting to see John Wick come out in? Does the studio in charge give you hope that it will at least be better than most other film-based games? Do you think you will be able to recreate some of the better fight scenes from the films in the game or will we be able to do worlds better? Let us all know down in the comments and then feel free to discuss. When there is more to share for John Wick Hex, we will share it all here. Be sure to keep checking back in for all of that as we head onward into the future.