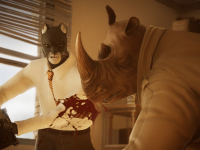 Some of the other well-known narrative-adventure games may have been put to rest not too long ago, but it looks like that has now opened a door for things like Blacksad: Under The Skin. Ever heard of it? Maybe or maybe not, but now you are as this is the next title coming out there in the genre from Pendulo Studios placing us in a noir-style story as a detective cat-person. That is the worst and most derivative way of explaining Blacksad. You clicked the link in, though, so you knew you were in for something. That or you just wanted to find out when the game was launching and that would be September 26th for now. We have you all covered.

With that all said, what we have here now is a bit more of the story behind Blacksad: Under The Skin and some of the gameplay. More of the in-game visuals as things play out and less on gameplay, as it is a bit foggy on how we will manipulate things in the story but I think it is safe to assume things as we saw out of Telltale. That should get you fully on board with where I am for Blacksad. If not and you already knew a whole lot, then have a gander below as you can pick up the collector's edition of the game now. It comes with a statue for the character and a portfolio. All for a slightly elevated price. Enjoy now that you are up to speed no matter where you were in the process.

Blacksad: Under The Skin — Story Trailer Blacksad: Under The Skin, the narrative-adventure video game developed by Pendulo Studios and YS Interactive unveils itself in a story trailer. Discover more information about this thrilling investigation, encounter some of the astonishing characters and, for the first time, listen to the official voice of John Blacksad!

The 50s, New York City: Joe Dunn, owner of a boxing club, is found dead. Meanwhile, rising star Bobby Yale, due to take to the ring for the most important fight of his career, has mysteriously disappeared. Sonia Dunn, Joe’s daughter, takes over the gym and must deal with its financial woes. She hires private detective John Blacksad to investigate Yale’s disappearance.

With its anthropomorphic characters and its incredible 1950s feel, Blacksad: Under The Skin delivers all the eerily dark adventure of a detective novel, just like the eponymous comic book series.

While embodying detective John Blacksad, players will have to conduct this adventure in their own way. Depending on their decisions, players will influence the relationships between Blacksad and the other characters as well as the very end of the investigation.

Alongside this story trailer, Microïds disclose the details of Blacksad: Under The Skin’s Collector’s Edition which includes a Blacksad resin statue, a portfolio and of course, the game!

Blacksad: Under The Skin will be available on PlayStation 4, Xbox One, Nintendo Switch, PC, and Mac on September 26th, 2019.

Had you heard of Blacksad: Under The Skin before now and this was a nice look at the upcoming collector's edition or were you left out in the lurch as I was at the start? Do you see the similarities in the IPs I alluded to here or did you need things spelled out like Wolf Among Us? Did you click in here on accident and now are pleasantly surprised and excited? Let us all know down in the comments and then feel free to discuss. If there is more to share for Blacksad: Under The Skin, we will share it all here. Just keep clicking on by to see and hear it all.