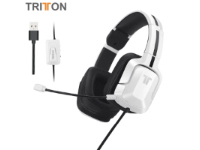 We sit down and review the Tritton Kunai Pro Headset. How does the 3D Audio work for our games? Will this be your next gaming headset?

We all know that when we are gaming audio can play a big factor and having the correct system or headset can change the experience. Immersion is always a factor to be sought after as it increases the enjoyment of the game. Another thing sought after is the ability to pass the information along to the player through audio cues so they may be able to use more than just sight to understand what is going on. To that extent, it is also nice to be able to pass that information along verbally instead of going through a convoluted menu system. This is where the Tritton Kunai Pro Headset and the new 3D audio capabilities from Dirac Research come in. Something that I had the pleasure of diving into and reviewing on my PC and PS4. To get the ball rolling, and this is more of a preference issue, I am not a big fan of my headsets needing to be hardwired into a system. Some of you and I get some of the latency issues that can crop up with the recent wireless push, but this is a gripe I have nonetheless. More so as I never felt like I had enough length to have the freedom I enjoy when it comes to my games. I would be remiss to not dive into that and to point that out from the start as it was an issue I had a few times during my experience. There are several feet of cable to allow some movement, but I always felt tethered with the headset. Even when I knew it was to offer up an audio quality I will go into further down.

As the audio quality is not something to go into the negative for this headset, that will come later. For now, the next large gripe I have has to come with the detachable microphone that is on the device. It may sound like a great feature, but it was something that seemed to cause an issue on the receiving end of it all. This could be due to me not being able to properly place the mic back in, but it seemed like the audio quality on the mic was a bit muddled or gravelly. This is according to audio clips recorded and others receiving my voice. Not to the point where it caused an issue, but something that seemed to be noticeable with the headset after removing and replacing once or twice. It is not a recording studio level of quality, but will do just fine for what most gamers will use it for. I would not call myself an audiophile in the very least, but I do enjoy having some crisp and smooth sounds come out of my devices. No matter what I am doing, and with that the Tritton Kunai Pro Headset fully delivered. I am talking just the basic stereo and surround level of audio when testing things out just for a few films and music during my time. I am generally an earbud person as it feels like I can hear more with them, but these have me reconsidering all of that as it all sounded amazing in general. Almost to the level of having a large sound system strapped to my ears while tethered to a location. It blocked out the outside noise and kept me firmly placed in my audio experience at hand. In a noisy world, this is hard to get.

TThe largest selling point for this headset had to be the new 3D audio, using new software from Dirac Research to power it, which it was touting to be able to give. This is something I generally roll my eyes at as it is something I have generally only experienced in large theaters or specialized rooms. This headset and new drivers fully delivered. Hells, even when in use on the PS4 I was able to get true feeling 3D audio while moving around the virtual worlds. It truly shined when placed over a VR helmet, but even in the most basic of games, I was able to hear in a 3D space. Even something as minor as a radio playing off in the distance felt like something in my home where I had to double check I did not leave something on. It looks like my love of earbuds may be going the way of the dodo after this. In general, I would recommend you picking up the Tritton Kunai Pro Headset. What it claims to offer up fully shines through and offers a lot of advantage to gamers and audiophile in general. More so when you pair it with an amazing VR experience or a game that has taken all of this into account. The only true drawbacks I came into with the headset stemmed from personal preference and nothing inherently wrong with the device. Since it only has a USB jack on it, you are limited to any other uses of the headset, but given what it was meant to be for, it is something anyone can overlook in today's market. Time to get back to hearing those zombies swarming me in my games now.

I give the Tritton Kunai Pro Headset 35 Clicks on the Click scale.

The unit was provided by Dirac Research for review purposes.