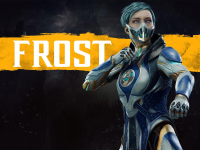 Today is the big day as Mortal Kombat 11 is now out there in the world for those who have pre-ordered and downloaded over the night. That or took the day off to go pick it up and give it all a solid play. Whatever the case may be, NetherRealm Studios has their game out there for us all and some of you may still need a bit more incentive to go pick it up. That is why we are back with a look at two more characters for Mortal Kombat 11 with actual gameplay for Shao Kahn and the official announcement and showing of Frost here. Even if she is not on the roster from the start of the game…

Yes, Frost is in Mortal Kombat 11 but not from the start. Also not in the game as DLC but as an unlockable character after progressing through the story a bit and doing a few things. We will not be spoiling any of that on the site here so you can look that up elsewhere if you do not care about spoilers. If you do care about seeing how she looks and plays in Mortal Kombat 11, here we go with the official reveal trailer that has all of the basics we have seen for all of the other characters thus far. Combos, fatal blow, crushing blows, and one fatality. Have a look and get that hype ball rolling for you.

Can you feel the chill in the air? Frost makes her long-awaited return to kombat in Mortal Kombat 11.

If that was not enough and you have not jumped into Mortal Kombat 11 on your own just yet, then here we go with more gameplay to take in. All of which pulled from the most recent Kombat Kast that took place which shows off the basics of the character as well as some of the cool little extras and nods to the other games out there. You can have a look and get that excitement rolling that much further until you can sit down and unlock her in the main game. Have a look now.

The team at NetherRealm Studios reveals Frost gameplay and breakdown her moves during the weekly Kombat Kast leading up to the release of Mortal Kombat 11 on April 23rd.

Last up, we have a new full look at Shao Kahn in Mortal Kombat 11. This would be the first technical DLC for the game as he was the pre-order bonus for those who took advantage of all of that. I am sure that at a later date he will be out there for all at a smaller fee. At least now you can have a look and see if that is something you will want to throw down on. He does look to be on par with Goro from the last Mortal Kombat title as in playing a boss character and not just a beefy one. Still pretty solid for a character that could have been free for you already.

Have you already picked up Mortal Kombat 11 and this is your break from the game to read just a bit more? Are you glad to finally see Frost in motion for the game or were you hoping this would be a different character in the longer run? Who do you think will be the official DLC coming after the characters announced already? Let us all know down in the comments and then feel free to discuss. For more on Mortal Kombat 11 as it is placed out there, be sure to check in here. We will keep the updates flowing out there as best as we can. Do not miss out on a thing.