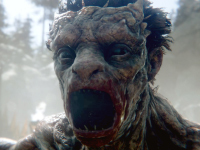 It looks like the old Project Wight is no more as it will now be known as Darkborn from henceforward. Not that The Outsiders has scrapped the former title, but that was just the working title before we have the current name of this interesting title set down to be able to know what game we are talking about. Not the biggest of news here unless you are overly excited for just something named Darkborn. I guess this is why we also have some new gameplay for the game to dive into and see how it has progressed. Yes, this means we have some new footage for the game even though some of it feels like what we saw before. This is an iterative process after all.

As a recap for those left out of the loop, Darkborn will have us taking on the role of a small monster baby that survives a bit of a Viking slaughter and is looking for revenge. You must sneak and evolve until you grow large enough to be able to enact your revenge and kill them all. The video here makes it all seem like a short progress as the monster gets rather large fast, but that could just be how this is shown to give us an idea on how Darkborn is going. It still looks pretty and has an interesting concept to it, so I am still all in. I cannot wait to see more for it.

The debut game from developer The Outsiders, Darkborn places you in the role of a little monster who must grow and evolve to seek revenge on the humans that devastated your family.

What thoughts do you have on Darkborn here after the latest gameplay? Does it seem to evolve rather quickly or is this just how the video is edited here? Do you think we will keep the split between action and stealth all through the game or will it be split as the video shows here? Let us know down in the comments and then feel free to discuss. For more on Darkborn, keep checking in here. We will keep our eyes open for more and, hopefully, that will not be too far off. Clawed fingers are crossed over here.