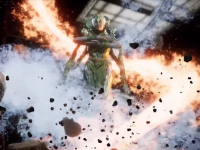 Another new character is coming to Mortal Kombat 11, and we now get to see her in action. While it does feel like many of the characters NetherRealm Studios is bringing us here are from the older titles, we at least have a few new ones peppered in. That is what Cetrion seems to be doing here even if she is an elder god from the Mortal Kombat universe here to make things feel a little unfair. I could have sworn that they were supposed to all stay out of it. I guess if Raiden is in, then it is fair game for all. At least as we are seeing another one jumping in the mix now.

As you will see, if you have not skipped ahead already, she brings all of the elements with her to Mortal Kombat 11. Not just the four basic out of Western mythologies, but it looks like the Eastern mythologies get mixed in too. It is hard to see what kind of fighter she is or if she is just a straight mix-up character for this Mortal Kombat, but at least we have someone new to play with. Even if the fatality is not too over the top for many others out there. Have a look at Cetrion in the most recent trailer below.

As an Elder God, Cetrion's moveset highlights her connection to the Earth featuring plenty of elemental abilities.

On top of a new fighter for Mortal Kombat 11, we also have some new news on how the variations will mix into ranked matches as well as some other features coming back. As it turns out, the variations will be sidelined when you go into a ranked or tournament play. You can bring over your cosmetic look, but you will be reduced down to two core variation crafted by NetherRealm Studios to keep things fair. This is not too surprising given how crazy and specialized some of these fighters could be made in Mortal Kombat 11. Be sad or glad depending on it and just know the rest of the game will embrace your creativity.

Also, it looks like the co-op options will be back for the towers in Mortal Kombat 11 where players will be able to have tag team matches in certain towers. There will also be towers similar to the Boss Battles of Injustice 2 but given the lack of factions and guilds in this Mortal Kombat's online mode, it looks like we will each be scored on our own. Take that as you will based on the rewards you want to try to farm in online play. Maybe things will change in the future for the game.

What are your thoughts on the new character her for Mortal Kombat 11 and do you think she fits in correctly? Do you like the fact that you will be able to look however you wish online for the ranked matches even if you cannot use the load outs? Will you be looking to play only online or will you stick to the offline modes that will be along for the ride? Let us all know down in the comments and then feel free to discuss. For more Mortal Kombat 11 news and updates, be sure to stick close here. We will keep them all rolling out as fast as we can.