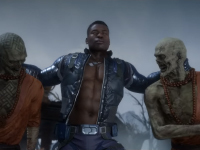 The blitz for updates on Mortal Kombat 11 is on us as we have three more characters to bring up with a nice new trailer. Some of them were alluded to in past trailers given to us from NetherRealm Studios, but all of them come from past titles. Not the biggest of surprises given that we are going back in time with the story here in Mortal Kombat 11. It would be weird if we did not get to see Jax, Liu Kang, and Kung Lao in this game. They could have left them as story characters and nothing more but I have a feeling gamers would have been extremely upset by that if they did.

Looking at the characters here, they look like they handle quite a bit like they do in past Mortal Kombat titles. They have been updated to fit the new game and changes that have been made, of course, but still look and feel like they have in the past. It would be a bit odd if they were drastically changed, so I guess that it is good where they are right now. You can see them all in action as well as a bit more for the Mortal Kombat 11 story just below. Have a look, enjoy, and then wait to see who else will be shown off out of PAX East here and the various other events going on.

Warner Bros. Interactive Entertainment and NetherRealm Studios today revealed the new Mortal Kombat 11 Old Skool vs. New Skool Trailer, showcasing a variety of past and present characters from the rich Mortal Kombat history who meet up as part of the time-bending new narrative. Through the immersive story mode, players take on the role of numerous fighters from different eras, culminating in the ultimate generational clash as current characters collide with their alternate selves.

Additionally, a number of fan-favorite fighters were revealed today as the latest playable characters coming to Mortal Kombat 11, including Liu Kang, Kung Lao, and Jax Briggs.

Are you at all surprised that we have these characters here for Mortal Kombat 11? Do you agree that they look to move and handle like they did in the past or do they feel like they are completely different characters for you? What other characters are you looking for in the game and do you suspect we will get some solid DLC characters mixed in soon? Let us all know down in the comments and then feel free to discuss. When we have more to share for Mortal Kombat 11, we will share it here. Just be sure to keep checking back in for all of that and more.