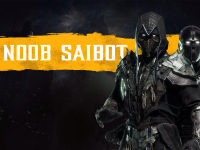 Just as we could all assume, we had a few more characters get the announcement out there for Mortal Kombat 11 fresh from the C2E2 event that has taken place. There was not hiding the fact that this was going to happen as NetherRealm Studios teased it and was heading to the event that was in their backyard. Now that it has all taken place and the dust has settled, we now know that Noob Saibot will officially be in Mortal Kombat 11. This throws a bit more credence to the leaked roster out there, but there is nothing like seeing the character in motion and tearing things apart. I mean that in the most literal sense of it all.

Since Noob Saibot is announced for Mortal Kombat 11, that means we do have a nice little trailer to look at that highlights just how the character will play in the game. Not too surprising, he will have his shadow twins mixed in and use more of that style of magic we have come accustomed to for the character over the years. He does bring yet another one of the more gruesome fatalities with him too. Some will say that his Mortal Kombat X one was one of the goriest, but this one we have here in the trailer looks to take that as a challenge and tries to go over the top yet again. Have a look and see how you feel.

Noob Saibot, once known by the name Bi-Han, and the original Sub-Zero, he was a cold-blooded assassin, corrupt from years of violence and evil. Murdered by his clan’s enemy, Scorpion, Bi-Han was resurrected as the black-clad wraith, Noob Saibot. Both shadowy and mysterious, his soul was stripped of compassion and remorse, and now he considers himself the perfect warrior using his ninja-like and phantom abilities to carry out his darkest impulses.

That is at least one of the characters coming to Mortal Kombat 11, and now we have the next. This one is coming via the DLC that can be picked up for the game via multiple different avenues. While a nice new character, it is not one of the DLC characters I was hoping for but Shang Tsung will be back and played by the actor from the Mortal Kombat film fame. The character will also be the one that takes us through the Krypt to unlock everything in the game, which feels like it was an afterthought more than planned to me, but will be all in for the fight nonetheless. We do not have any action of the character as of yet, but you can see the look and feel down in the following video showing everything mentioned.

Shang Tsung was the host of the first Mortal Kombat tournament and faithful servant to Shao Khan. A powerful, shapeshifting sorcerer, he absorbs living souls to maintain his youthful appearance and command, while morphing into other characters to use his adversaries’ own moves against them in battle. Shang Tsung is one of six playable DLC fighters included in the Kombat Pack, which is part of the Mortal Kombat 11 Premium and Kollector’s Editions.

Where these the characters you were hoping for in Mortal Kombat 11 or are they just about what we assumed would be in there? Do you think that this further proves the leaked roster or will we have to wait for that still? Do you think Shang Tsung was a planned thing or did he evolve from the Krypt idea we see presented here into what we are getting? Let us all know down in the comments and then feel free to discuss. For more Mortal Kombat 11 news and updates, be sure to stick close to the site. We will keep all of them coming as fast as we can.