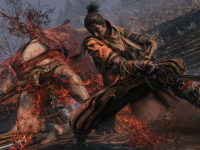 A recent media event has brought us loads of new gameplay for Sekiro: Shadows Die Twice to take in just before Sekiro launches this month

You do need to love when huge media events take place for games as it brings a whole lot of new gameplay to as is the case here for Sekiro: Shadows Die Twice. While not always the case, we usually get some massive updates or at least some new in-game footage to look at and enjoy. FromSoftware is cutting it a little close as Sekiro does launch on March 22nd, but we will not scoff at all of the footage and visuals we can take in for the game. At least if you are down to punish yourself further in and outside of the game here. It is what the studio has become famous with is it not?

There is not much in the way of new information for Sekiro: Shadows Die Twice and how things work, but in the hours of footage out there now we can at least see it will run the same gaming loop of sorts. We will need to take a mission, sneak into a location or go swords-a-flying, murder everything, try not to die two times, and then move to the next location. The grind is going to be in the combat, fur certain, as we all knew was coming and can see in the new footage here for Sekiro. I will stop with the finger tapping and let you move on to what you truly came here for now.

In Sekiro: Shadows Die Twice, death isn’t the end of your journey. Check out this gameplay clip of us destroying our enemies in the Senpou Temple with some interesting combat mechanics to add into the mix.

How are you feeling about Sekiro at this point and does it look like it will be the next big game from the studio? Do you think there will be more and deeper meaning to the game instead of the feudal Japan skin on the same style of gameplay? Do the visuals of the game hold up to what we have seen in the past or do you see some kind of downgrade since? Let us know those answers and more down in the comments. If there is more to share for Sekiro: Shadows Die Twice, and I hope there is, we will have it all here for you. Just be sure to keep coming back to check in on all of that.