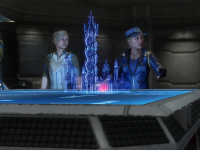 We have more Mortal Kombat 11 to take in and it is more than just a new character teased or shown off. In fact, it is more of the story that NetherRealm Studios is crafting for the game along with the announcement of three more playable characters mixed in. Yes, three more to the roster even though we have most likely been able to see the full list Mortal Kombat 11 will have mixed in already. More so when all of the "new" fighters here fall in line with the said leak. That is not why we are here, though, as we have a nice new trailer to take in and see just what is going on in this universe.

As we have been promised already, Mortal Kombat 11 picks up right after the last game and will mix in some new time travel elements to it. Not for the gameplay, but for the story and we get to see the fun that will cause as we have two Johnny Cages here in the trailer. Also the showing of Cassie Cage, Jacqui Briggs, and Erron Black as those mentioned playable characters. The trailer does also allude to other characters being in the playable roster of Mortal Kombat 11, but they could just be in the form of the story as we saw in the past. You will see all of those characters in the following trailer and know what I am talking about.

Warner Bros. Interactive Entertainment and NetherRealm Studios today released the new Mortal Kombat 11 Story Trailer, introducing an original, time-bending narrative that continues the franchise’s epic saga. In Mortal Kombat 11, Raiden’s defeat of the evil Elder God, Shinnok, has drawn the ire of Kronika and upset her desired balance between good and evil. To restore stability in the realms, Kronika has only one option — rewind time to its beginning and restart history.

Through the immersive story mode, different eras of the rich Mortal Kombat history collide as players take on the role of a variety of past and present characters who must join forces to defeat Shao Khan’s Outworld armies and solve the temporal crisis at stake.

If you want more gameplay for Mortal Kombat 11 after that, then you are also going to be in luck. We also have a look at Cassie Cage in action here for the game and it looks like her personality may have changed a bit more than I remember from the past. I could be wrong. We also have a nice look at Kano to detract from that too, so you can have a look at more of the actual gameplay just below. Although, I do need to warn that this is not from someone that looks to be an expert in Mortal Kombat. At least it is something.

How are you feeling about Mortal Kombat 11 after getting more of the story and these few new characters added in? Did you figure these would be the characters added to the roster or did you want others that we see in the trailer instead? Whom else do you suspect will be added in as we march on as well as get the DLC? Let us all know down in the comments and then feel free to discuss. For more on Mortal Kombat 11, be sure to keep checking in here. We will keep all of those updates coming at you as best as we can.