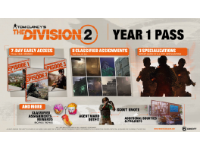 The open beta for The Division 2 just kicked off today and here we are talking about what to expect down the road after the game launches on March 15th. It always seems odd to see all of this post-content talked about well before a game actually launches, but at least most of what we have here is being doled out for free from Ubisoft. Not just little things that could have been included in the launch version of The Division 2, but items and content that obviously will take Massive Entertainment just a bit longer to get done. That and the fact that they both want you deep in the game for the foreseeable future and not just playing and setting it aside.

It is interesting to note here that it looks like The Division 2 will be taking a page out of Odyssey's playbook as it is following suit. That is, there will be a season pass for the game to be picked up, but we will be getting new campaigns, missions, game modes, and all that jazz for free. There will be other items, like Odyssey, that will unlock for The Division 2 for those who pay the extra price, but the focus we should see here is that there will be some big things coming just for the price of admission. If this will be pseudo-locked behind micro-transaction is still yet to be seen. If any of the other recent games from Ubisoft are anything to note then I will guess that will be the case. At least for those who do not want to go through the grind of playing the game. With a full year of FREE content, including new campaigns, specializations, game modes and more, The Division 2’s post launch content will keep you entertained for a long time to come. Plus, with the Year 1 Pass, you’ll enjoy early access to it all.

Did you expect to see all of this for The Division 2 before launch or is this kind of the MO of the publisher at this point? Do you like the new model they have set up or would you rather see all DLC be a post-launch thought and not something planned out well before? Will there be the same micro-transaction set up here or will it truly be free for those who do not want to grind away? Let us all know down in the comments and then feel free to discuss. If there is more for The Division 2, and we know there will be, we will have it all on the site for you. Just be sure to keep checking back in for all of that as time marches on.