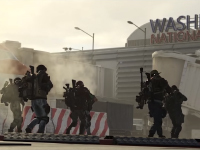 We are mere weeks away from The Division 2 launching out there and it is time to hit up another trailer for the game. Something that we have not felt like we have seen enough over here, but it is high time to give Massive Entertainment's game a little bit of that spotlight. Not that it truly needs it given all of the other places Ubisoft is pushing the game, but we want in too. Even if The Division 2 is launching on March 15th and there is not much time left. All of which are just semantics and now we are diving into a new trailer for the game.

It looks like it is time to enter a different kind of Endgame than most nerds are familiar with as that is the title for this new trailer. Although it does seem to dive more into the story of The Division 2 than past trailers. Not only that, but it also puts a focus on just what we will be fighting for in the game's world. Outside of just our lives and such. Have a look at the new video down below and see if you can find any new tidbits for The Division 2 that may have gone missed in all the media so far. More or less, it is more hype for a game that already has its own high levels of that already.

This isn’t the end, Agents. The fight for our city has only just begun. Welcome to The Division 2 Endgame.

Did you learn anything new for The Division 2 here based on this video? Do you expect that this one location is going to keep being the main focal point in the story or is this some elaborate rouse to give us a true shock later? Do you think we need more hype for this game or has it been at its perfect level this entire time? Let us all know down in the comments and then feel free to discuss. For more on The Division 2, keep your eyes locked into the site here. We will try to keep the updates flowing as best we can.