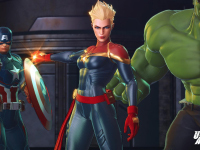 More heroes are joining the ranks of Marvel Ultimate Alliance 3: The Black Order after the most recent Nintendo Direct stream. Not too shocking as we only had a small sampling of characters announced from Team Ninja so far, so it was about time to get more. Also not surprising, it looks like the next character to join in this Marvel Ultimate Alliance title will be Captain Marvel. You know, the heroine that will be driving a good portion of all of their non-paper media forward here in short order. With her own film and importance in that medium, it was almost a given that she would be in there and we would have that announcement before her flick this March.

What is also interesting here for Ultimate Alliance 3 is the blink and miss it moment where four other heroes are mixed in. Until now we did not have solid confirmation that The Defenders would be in the game, but they are now so expect Daredevil, Jessica Jones, Luke Cage, and Iron Fist mixed in. All of whom look to be taking more of the comic book look over the Netflix one. Great in some ways and meh in others. Just know that we will have them all in there too when Marvel Ultimate Alliance 3 drops this Summer. Oh yeah, that would be the current release window as well that is teased in the following trailer showing of Miss Danvers. The Captain Marvel one and not the Supergirl one, obviously.

For the first time in 10 years, the Marvel Ultimate Alliance series returns with four-player action and an original story… all exclusive to Nintendo Switch! Assemble your dream team from a huge cast of Super Heroes, including Marvel’s ultimate cosmic protector, Captain Marvel.

Are you at all surprised to see Captain Marvel in Ultimate Alliance 3? What are your thoughts on The Defenders being dropped in here and do you think that we will see other lineups of the team or will it be the Netflix version? What other heroes are you hoping to see in the game and do you think we will get some of the darker ones in there too? Let us all know down in the comments and then discuss. I know there will be more for Marvel Ultimate Alliance 3, so be ready to see all of those updates to come at some point. We will do our best to keep the site updated as best as possible.