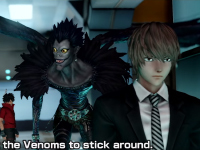 Just a bit more of the story for Jump Force has fallen into our laps here as we have a new trailer to take in showcasing all of that. Maybe not all of it, but enough of it to keep us going as we wait until February 15th to get the full story from Bandai Namco. That all makes sense as we would not want to have the whole thing spoiled before launch. We are also gamers and we want as much as we can get, so here we go with just a little bit more for Jump Force. We also get to see a few of those other characters in motion too. You can most likely guess who they are by now.

Before you get all hyped up and dive right into the story for Jump Force here, note that this is the most basic version of it just with some gameplay footage. Different "Jump Worlds" are merging and terrors called "Venoms" are spreading out there via the villains of the IPs being merged together. That is where the heroes of the individual worlds step in so they can fix the issue that is causing all of this. I am still not sure how Death Note is going to fit in here as the characters are not playable in Jump Force and there were no true heroes or villains, but they needed to have it in there to get some of us excited.

You can see all of what I am talking about just below. Try not to get too overhyped and just wait for the game to fully hit the PS4, Xbox One, and PC before you get to that point.

Without warning, our world and the Jump Worlds have begun merging together. As Venoms grow in numbers and spread terror throughout the lands, it’s up to you to work with the Jump Force to protect what we hold dear. It’s time for you to take a stand against evil! Take a look at the all-new Story Trailer to see what awaits you in Jump Force.

What are your new thoughts on Jump Force's story as it stands here? Did you pick up on any new bits we have not already known or is it all about what we figured it to be? How do you think the non-playable characters will fit in when their worlds do not blend as well as one would think? Let us all know down in the comments and then feel free to discuss. For more on Jump Force, be sure to keep your browser set to the site here. We will update as soon as we have more to share.