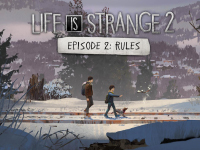 In just a few days we will be able to continue the journey of Life Is Strange 2 as the next episode drops on January 24th for the PS4, Xbox One, and PC. This is something many of us have been looking forward to but have yet to see much of as DontNod only put out a live action recreation of the final scene from the last episode to announce all of this. While it was cool, it did not get us all the look at this episode of Life Is Strange 2 that we were hoping for. It has been an interesting tale so far and I know I am ready to see it building into a larger world that Square Enix push forward. Maybe that is just me though…

With all of that said, we have a new trailer for the second episode of Life Is Strange 2 to take in and get us all more hyped up for. More so as it looks like it will tie right back into The Awesome Adventures Of Captain Spirit as it was teased back at E3 when that solo story dropped for free out there. Even more so as it looks like choices from that little segment will play into the larger aspects of Life Is Strange 2 in some way. Given that it looks like Daniel becomes friends with the character while trying to figure out his powers, I can see a few ways that could play out. We will know for certain here in a few days though so there does not need to be much speculation before then.

The second episode of Life Is Strange 2 is titled ‘Rules’ and will release digitally worldwide this Thursday, January 24th, 2019, for Xbox One, PlayStation 4 and PC/Steam.

Episode 2 picks up a few months after the events of the first episode, as Sean and Daniel are on the run from the police following the tragic incident in Seattle and the manifestation of a strange supernatural power. Things are getting tougher as the seasons have changed and the winter cold is setting in.

The power takes a central position in the story as Daniel is slowly coming to terms with his abilities. The brothers have to practice Daniel’s control over his powers so he can be less of a danger to himself and others, but at the same time, they also have to hide his abilities from a world that won’t understand.

They have come to an agreement on a set of rules for how Daniel uses his abilities in order to keep them hidden: Never in public. Never talk about it. Run from danger. However, can a 9-year old really follow the rules?

How excited are you to finally be able to dive back into Life Is Strange 2 here? Does the time jump bother you a bit or does it make more sense for the story to push forward in your eyes? How deep do you think the Captain Spirit crossover will go or will it be a bit on the basic side of things? Let us all know down in the comments and then feel free to discuss. When we have more to share for Life Is Strange 2, we will share it all here. Be sure to keep checking back in here for all of those updates in the coming weeks and months.