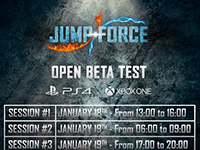 Yes, the open beta dates for Jump Force have now been set and we have a few more details to go right along with all of that. It is a little hard to say if this is going to be a true beta test or stress test when it all boils down as Bandai Namco is kicking it all off on the PS4 and Xbox One on January 18th. Almost a month out from the launch and with multiple days and time to go at it, we may be able to shape Jump Force just a bit more than making sure we can play online together. At least that is the hope a lot of gamers will have I am sure.

In addition to having the dates and times for the Jump Force beta, we also know that we will have 17 of the characters at our disposal to fight with over 5 different stages. all of which can be seen in the following images so you can see who and where you will get to experience. It seems odd to have an odd number of characters available given the 3v3 style of fights, but these could just be the ones that they feel need more work and balance. I guess we will know better if it all feels off when the Jump Force beta starts up next weekend. Do you think that this will be a true beta for Jump Force or will it be a stress test more than anything? Do you find the number and characters selected to be odd too or does it all make sense to you? Will you be able to get into the mix of the beta or will the times keep you out of it? Let us all know down in the comments and then feel free to discuss. For more on Jump Force as we head toward the release, be sure to stick close to the site. We will have all of the updates that we can before and after it comes to market.