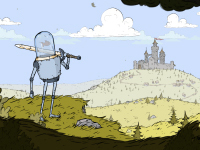 Almost a year after we first heard of Feudal Alloy over here, we are seeing the game finally come to market. Yes, that means that the release date has been set down and we can expect to play this game from Attu Games on the PS4, Xbox One, PC, and Switch on January 17th. Not much time between now and then, but that just makes it all that much better. I mean, we could be waiting until 2020 to play Feudal Alloy and I would be rather put off at that point. Just about the wait and not anything to do with the actual game here. It is a platformer where we are playing as a fish in a suit of armor after all. You read that right.

With that, we also have a new trailer to go with this announcement that shows off some solid gameplay and how the hand-drawn art has progressed to now. It is looking like the last year has been extremely kind to Feudal Alloy based on all of this as it looks nice and just plain fun. That is based on a trailer and not being able to actually play the game as of yet, but it would be hard to truly screw that up here. It is a pretty straightforward genre as a basis and now we have a fun new twist. Have a look at the latest for the game just below and then get ready to pick it up in just over a few weeks from now.

Coming to Steam, GOG, PS4, Xbox One, and Nintendo Switch on 17th January!

Is this the surprise you were hoping to come this soon for Feudal Alloy or did you forget this game was coming? What do you think about the art style we have here and is it looking better than you remember? Are you curious about how the fish is actually controlling things or is that getting too technical for the game here? Let us all know down in the comments and then discuss. If there is more for Feudal Alloy, we will have it all here. Be sure to keep checking back in for all of that as we head toward into launch and then beyond.