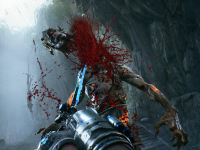 The first-person Hack-N-Slash FPS, Bright Memory, will be coming to Early Access on Steam with about a third of Bright Memory’s content

If you have been paying attention to smaller developers out there then you may remember a little title named Bright Memory that was granted funds and had a team of one working on it. It looks to be a blending of hack-n-slash gameplay with a bit of an FPS mixed in and now it looks like we will be able to give it a go on January 12th. That is when Bright Memory is heading to early access over on Steam so those interested in the game can see how it has come along since it was first showcased in 2017. Something that still looks rather impressive given the size of the team in general.

This Early Access will house about a third of the final game's content with the rest coming when Bright Memory goes fully live. I mean, that would be the assumption but it does look like there are plans to mix in some VR support and achievements in the mix for the game down the line as well as the additional content the creator is still working on. That is why we are here in Early Access as that is generally the case for these kinds of things. You can have a look at where Bright Memory is currently as it heads toward its start of the release cycle. It does look to blend some interesting gameplay mixes in there for those looking for a new style of game.

Bright Memory is a first-person action shooting game, the players can control different styles of special abilities and create a set of gorgeous combos with the combination of skills. It tells an adventure story of Shelia of Natural Science Research Organization (SRO).

2020, SRO discovered material in an ancient sword which could recall dead creatures during an investigation of cultural relics crime. The third-party military organizations (SAI) infiltrated into SRO’s research institute and tried to grab the material. They changed the coordinates of the transmitter to the edge of Arctic where they found a land of sky that a large number of ancient creatures exist. SRO must stop SAI’s conspiracy and find out the truth.

Have you been keeping up on all of the updates for Bright Memory or is this the first you are digging into it? Does it look to be a little too hyper-paced or just the right amount for an FPS style game? Are you just impressed with how much one person has been able to do here and hope that there is funding for even more? Let us all know down in the comments and then feel free to discuss. If there is more to share for Bright Memory, we will share it all here. Just be sure to keep checking back in for all of that as we march on into the new year.