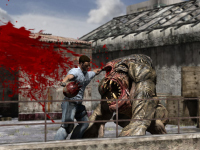 It looks as if a new Serious Sam Collection has been spotted out in the wild. Well, at least the rating for the collection has been and nothing that Croteam has officially stated, but it does sound like we could be seeing a collection here. Oh, we already had one? Well, this Serious Sam Collection is poised to hit the PS4 and Xbox One instead of the older consoles as the previous one did. So yeah, it looks like it all could be coming to the current gen systems if everything pans out the way it usually does with these kinds of finds.

All of this comes from a new rating by the ESRB that dictates that the Serious Sam Collection is slated for the PS4 and Xbox One. There has not been an official announcement or listing of what will be coming, but it is looking like the bundle that housed Serious Sam HD: The First Encounter, Serious Sam HD: The Second Encounter, Serious Sam 3: BFE, Serious Sam: Double D XXL, and the DLCs where appropriate is what we should expect. More or less the older bundle just supercharged for the current consoles is what the current thought on it all is. Maybe there will be some twist, but I doubt it at this point. This is a collection of first-person shooters in which players battle aliens and monsters in frenetic combat. Players use pistols, machine guns, shotguns, and sledgehammers to kill numerous creatures. Large blood-splatter effects occur during combat. Enemies are sometimes shown blowing themselves up into bursts of limbs and blood. Players are also able to rip the eyes out of creatures' heads and/or rip the hearts out of soldier-like aliens. During the course of the game, harpy-like enemies are depicted topless (though usually from a distance). One character briefly references drugs in the dialogue (e.g., “I'm supposed to be doin' blow off a stripper's a*s right now.”). The words “f**k” and “sh*t” appear in dialogue.

None of this truly surprises me given that the official fourth game was just announced this year and Croteam may need some extra funds to keep working on it, it does make sense to put this out there. That and it would allow for all those new gamers to see where everything started from before diving into the new title. All in one location at that. Still treat this as a rumor of sorts as there has not been an official word, but these ratings have almost always led to a release when spotted out there. I am guessing we may hear official word early next year.

Are you surprised at all to see the Serious Sam Collection rated for the PS4 and Xbox One? Was it only a matter of time or do you think it is the team gearing up for the new game so fans can be fully up to speed by that release? Do you think there will be anything different for this version or will it just be the usual graphical upgrade and ability to run on the latest systems? Let us know what you think down in the comments and then discuss. If there is more for this Serious Sam Collection, we will update you here. Just be sure to keep checking in for all of those updates.