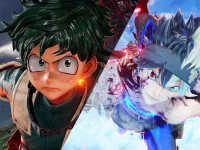 It is getting close to launch and we still have more characters coming for Jump Force as we have another video that shows some off. At least one new one and then one that was announced by Bandai Namco already and getting the flashing showing now. Unless you have seen Deku from My Hero Academia and/or Asta from Black Clover in the past for Jump Force before last week. I do not think I have, so we will treat them as fully new for our purposes. I mean, we have time to fill here before February 15th when the game hits the PS4, Xbox One, and PC.

I am not fully up to speed on these two characters outside of Jump Force, but there does not seem to be much in the way of new in terms of moves and attacks. Maybe I need to engross myself in their other forms of media to know, but I am guessing that the screams for Black Hurricane and Delaware Smash are something that the long-time fans of the properties would know best. They just seem like more of the generic attacks that other fighters in Jump Force have just with a twist. This could also be how little knowledge I have of most of the anime and manga that are being used for the game. Nonetheless, you can see them in motion just below and then wait for the game to launch.

The boy who always wanted to be a hero will be making his way to the biggest battle on Earth… Jump Force is going to be Plus Ultra!

Deku from My Hero Academia will unite to fight along with Asta from Black Clover when Jump Force releases on Feb 15, 2019.

Were these the two characters you wanted to see come to Jump Force now? Do you agree that things are looking to be more or less the same just with different skins or am I missing something when it comes to the new fighters we have had as of late? What other characters or IPs are you hoping will still show up in the game? Let everyone out there know what you are thinking in the comments and then feel free to discuss. For more Jump Force news and videos, be sure to keep coming back here. We will keep them all rolling out to as fast as we can before launch.